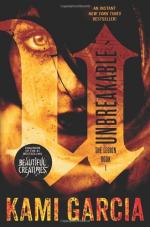 This detailed literature summary also contains Quotes and a Free Quiz on Unbreakable by Kami Garcia.

Seventeen year old Kennedy Waters leads an ordinary life until she comes into contact with a vengeance spirit late one night. Everything she knows is then overturned as she travels along with the Lockhart twins, Priest, and Alara after the mysterious murder of her mother. She learns about the Legion of the Black Dove and that they are a secret organization that was tasked to destroy the Illuminati but instead unleashed a demon named Andras upon the world. As it is the Legion has five members that are tasked with stopping Andras once and for all to atone for their sins and Kennedy is one of them. Kennedy soon discovers the Shift, which was foretold in the journals to be a weapon that can destroy Andras once and for all. It’s then they find the clue ‘Lilburn’ and figure that is where the first disk is. At Lilburn Kennedy comes with Lukas and Alara to encounter a ghost that has the first disk in her doll. Upon gaining the first disk they find the second clue: Millicent Avery, Middle River, Maryland.

The second location reveals a well where Millicent Avery and her dead child reside, watching over the second disk. Priest is the one who goes in first, but when he’s attacked Kennedy goes down the well after him and rescues him. Priest makes his first kill and they get the disk. Outside of the well Priest gains his mark, which is the original symbol used to summon Andras long ago. When a member makes their first kill they gain their mark. With the next clue the others see Dybbuk box, Sunshine which is the next location of the disk.

Sunshine has a magic shop where the disk is located in the Dybbuk box. Alara and Kennedy are the two that go after the disk and Kennedy reveals her eidetic memory as she draws up the Devil’s Trap to destroy the Dybbuk and gets the disk. The two set fire to the shop and as they’re leaving the spirit of the magician shows up. He tries to talk to them but Kennedy shoots him and the two leave. Later on Alara’s mark shows up, however Kennedy’s mark doesn’t. Confused, she runs away only to have Jared chase her. Kennedy’s feelings for Jared are revealed only for him to reject her.

The next location to show up is the Hearts of Mercy Children’s home. It’s a place of horrors as the group splits up, Kennedy and Jared in one group and the other three together. As Kennedy and Jared check the basement they find tons of children’s ghosts who show them the abuse they suffered. Just when they try and find the disk a boy about 15 years old shows up from the wall and walls them back into it. Kennedy is scared of enclosed spaces and Jared ends up revealing his feelings for Kennedy but tells her that he can’t be with her either. He reveals that their parents, who were all killed at the same time, were dead because of him. He complied a list of the member’s names because he felt they’d be stronger together and the next day everyone ends up dead. Rather than pushing him away Kennedy tells him she cared for him and the two share a kiss and he promises that he’ll never leave her. The gang soon chips them out of the wall and they find the disk in the child’s sledgehammer. After freeing the children of this home Jared and Lukas get into a physical fight over Kennedy and Jared. Jared then tells her that he can’t be with her because she’ll get hurt and Kennedy tells him that he did exactly what he said he wouldn’t.

The last location is the prison in Moundsville, West Virginia. This place housed Darien Shears, who is said to be a serial killer. As they’re searching the prison the group comes up to Darien’s room where there’s drawing that belong to the Legion of the Black Dove and quotes redone from the bible. The group then encounters Darien and they rush over into the electrocution room. Darien attacks them and puts Alara in the chair ready to fry her, but he disappears to get more power. As he disappears the group gets rid of his helpers and Kennedy finds the last piece of the shift in the chair. As she grabs it she rushes over to Darien’s cell and starts to draw the Devil’s Trap to destroy Darien. She catches him in the trap and he tells her that she has no idea of what she’s doing and that people are going to die if she does it. The gang yells at her to put it together and that she belongs with them and to do it. Kennedy puts the shift together and Darien tells him that he died for nothing and that ‘may the black dove always carry you’ the mantra of the Legion. As such Kennedy then realizes what she’s done - she has just opened the gateway for Andras.

The phrase ‘anDraS is here’ appears on the wall and Kennedy’s mark doesn’t appear. At the realization of what she’s done and that she’s not one of the Legionnaires, Kennedy is gobsmacked. Everyone heads out of the room and the world is going to hell as Andras arrives. The authorities are on their way as the prison catches fire and the group must split up. Alara and Priest head off one way and Lukas goes another. Kennedy and Jared leave to meet everyone up at the state border when Kennedy gets caught in razor wire. Jared isn’t going to leave her but Kennedy insists that he does. He promises to come back for her. After the two confess their feelings for one another he runs off and the authorities come and pick up Kennedy, who was until that moment considered to be kidnapped. She watches the prison in the distance wondering what she is going to do as she is not one of the Legion.