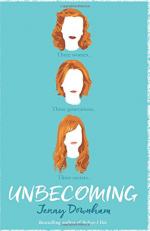 Jenny Downham
This Study Guide consists of approximately 58 pages of chapter summaries, quotes, character analysis, themes, and more - everything you need to sharpen your knowledge of Unbecoming.

This detailed literature summary also contains Quotes and a Free Quiz on Unbecoming by Jenny Downham.

Katie is a 17-year-old student who lives with her mother, Caroline, and her brother, Christopher. Chris, age14, has a developmental disability. Caroline is determined to control every aspect of her children's lives. Caroline pushes Katie to excel and depends on her to be the second adult of the family, often reminding her she will be responsible for Chris some day. Caroline's husband, Steve, has a young girlfriend and a new baby, though Caroline continues to refuse to sign the divorce papers. As if there is not enough chaos in their lives, Caroline, Katie, and Chris find out they are going to have to take responsibility for Caroline's estranged mother, Mary Todd, who is suffering from dementia. Mary's partner, Jack, has died and Caroline is inexplicably listed as their emergency contact. Though Caroline wants to outright refuse to accept the responsibility, she cannot bring herself to take that step. Reluctantly, she allows Mary to move in, hoping she can make other arrangements quickly.

Though Katie never knew she had a grandmother, she feels a connection with Mary that she can neither explain nor understand. Katie and Caroline begin to argue constantly, usually because Katie does not want Mary to go to a nursing home and Caroline sees no other option. Katie is also angry that there is obviously more to the relationship between Caroline and Mary than she knows, though Mary can no longer remember and Caroline refuses to explain. Katie finds dozens of letters Mary wrote while Caroline was in the care of Mary's sister, Pat, but Caroline refuses to let go of the anger she harbors toward Mary. When Katie goes to extremes in search of answers, she and Caroline have an epic argument that ends with Caroline going to a motel for the night, leaving Katie to cope with Chris and Mary on her own for the evening. That added level of responsibility makes Katie realize the pressure Caroline is feeling regarding Mary's care.

Through all the family issues, Katie is also coping with her emerging sexuality. She has discovered that she is gay, but she is not certain how to deal with the censure from her fellow students. When a fellow student leads the charge to harass Katie, she follows her instinct to hide the truth and to begin dating a boy in the hope that being “normal” will make her life easier. When a lesbian student named Simona begins to spend time with Katie and Mary, Katie finds her resolve solidifying, though she has moments of weakness.

When Caroline returns from her night away, Katie is determined to begin taking control of at least some aspects of her life. She reveals her secret to her mother and the reaction is not as terrible as Katie had feared. Katie also confronts Caroline with a clue about the connection Katie feels with Mary – a photo of Mary holding Katie when Katie was about four. Caroline then reveals the secret she has kept from everyone, proving Mary with an important memory that had been lost to the dementia. When Chris was an infant, Caroline had left for eight weeks, overcome with the demands of a baby who cried so often and a husband who did not seem to understand. Caroline had hoped her husband, Steve, would realize the stress she was under but Steve had turned to the only person he knew of who might help take care of the children – Mary. When Caroline returned, she was furious, partly because Steve had called on Mary for help but also because she feared she was becoming just like her mother.

The three generations of strong women – Katie, Caroline, and Mary – each learn that they are not alone in their pain and that they are stronger together. As the novel comes to an end, Mary's memories continue to fail. However, Caroline has come to a place of acceptance about her past and her family. Katie has come to accept who is truly is as an individual. The three women, joined by Chris, share ice cream sundaes on the beach, a tribute to Caroline's acceptance that Mary was not always the villain she had assumed and to their newfound feelings of family.

More summaries and resources for teaching or studying Unbecoming.