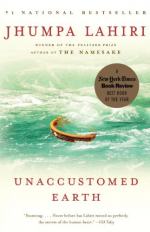 Jhumpa Lahiri
This Study Guide consists of approximately 43 pages of chapter summaries, quotes, character analysis, themes, and more - everything you need to sharpen your knowledge of Unaccustomed Earth.

“Unaccustomed Earth” by Jhumpa Lahiriis is a collection of eight stand-alone short stories that detail the experiences of Indian immigrants, primarily those in America. When taken together, the final three stories form a novella.

In “Unaccustomed Earth,” Ruma’s father, reeling from the death of his wife, has taken it upon himself to travel the world –something both of Ruma's parents had originally intended to do. Before he is due to visit Prague, Ruma’s father hopes to come and visit Ruma’s family in Seattle. Adam, Ruma’s husband, will be away that week on business. She tells her father he is welcome. However, she is worried about the visit because her father is so traditional.

The visit goes relatively well, but Ruma’s father continually encourages Ruma to return to legal work after her next baby is born so that she will not be dependent on Adam. Ruma can’t help but feel judged. She tells Adam over the phone that she thinks her father wants to move in with them. Adam tells her he’ll accept any decision she makes on the subject. In the end, it turns out that Ruma’s father has no intention of moving in with his daughter and her family because he has begun a relationship with a younger Indian woman who lives on Long Island, New York.

In “Hell-Heaven,” Usha recounts her family’s experiences with Pranab, a recent Indian immigrant to Cambridge, Massachusetts, who fast became a family friend. Bright, friendly, and social, Pranab became irresistible to Usha’s mother, who fell in love with him. Her feelings were never acted upon, nor were they returned. Usha’s mother became heartbroken when Pranab married a white girl named Deborah. Usha disliked Deborah intensely, especially whenever Pranab brought Deborah around. Years later, Pranab cheats on Deborah, and Deborah takes comfort in speaking to Usha’s mother.

When Usha deals with her own heartbreak, her mother reveals that following Pranab’s marriage, she intended to commit suicide by lighting herself on fire in the backyard. She was stopped by a neighbor who happened to come outside at the right time.

In “A Choice of Accommodations,” Amit and his wife, Megan, travel to Amit’s old boarding school, Langford Academy, for the wedding of his old friend, Pam. Pam’s father was headmaster at Langford, and Pam was the only girl on campus. Conveniently, she notices that the dress she brought for the wedding has a burn mark on it. She requests that Amit stay by her side all night to help hide the mark, which he does.

Late in the evening, promising Megan he’ll return, he goes to the hotel room to call their daughters but passes out drunk. When he awakens, Megan relates her worry at not having been able to find him the previous night. While at the Academy to say goodbye to Pam, Megan and Amit wander into one of the dorm rooms and have sex.

In “Only Goodness,” Sudha blames herself for her younger brother Rahul’s alcoholism. Sudha had never rebelled against her parents until she attended Penn State, where she began to drink in moderation. While her brother Rahul was visiting her one weekend, Sudha allowed him to drink. He quickly became an alcoholic, something which she attempted to speak to her parents about, only to be dismissed. Later, while sudha is studying for a master’s degree in London, she meets and marries an older Englishman named Roger Featherstone, and the two have a baby named Neel.

Rahul marries an American girl named Elena, and they have a chile. Rahul visits Sudha in London, claiming to be sober. Rahul convinces Sudha and Roger to go out on a date. They return to find their baby in cold bath water. Rahul is passed out drunk in the guest room. This causes an argument between Roger and Sudha. Sudha orders Rahul to leave the next day.

In “Nobody’s Business,” Sang is in an emotionally abusive relationship with an Egyptian man named Farouk, who is seeing more than one woman. Sang’s roommate, Paul, has fallen for her. While Sang is away visiting relatives, an intoxicated woman named Deidre calls the apartment looking for Farouk. Paul discovers Farouk’s womanizing, which Sang later accuses Paul of making up to get her to dump Farouk.

Only when listening in on a conversation with Deidre does Sang learn the truth. She confronts Farouk with Paul, and the two men wrestle until Paul gains the upper hand and Farouk flees to his apartment. Brokenhearted, Sang leaves for London. Some months later, Paul sees Farouk and Deidre on the street. Farouk tells Paul that he is lucky no charges were pressed for the fight.

The story continues in “Year’s End.” Kaushik must deal with his father’s decision to remarry a much younger widow for companionship. He also becomes a big brother to two small stepsisters. The situation becomes too much for him to handle. Kaushik drives up the East Coast of the United States. While driving, he reflects on having known Hema.

In “Going Ashore,” Hema and Kaushik meet in Rome in the late autumn and early winter of 2004. Hema is an academic engaged to be married, and Kaushik is preparing to leave for Hong Kong for a new assignment. They become lovers but do not commit to each other. On a layover in Thailand for a week, Kaushik goes swimming, only to be killed by the Indian Ocean tsunami on December 26.

More summaries and resources for teaching or studying Unaccustomed Earth.