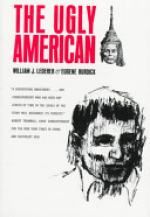 William J. Lederer
This Study Guide consists of approximately 76 pages of chapter summaries, quotes, character analysis, themes, and more - everything you need to sharpen your knowledge of The Ugly American.

The Ugly American begins in the fictional Southeast Asian country of Sarkhan, in the office of U.S. ambassador Louis Sears. Sears is upset because a hostile cartoon of him has appeared in the local newspaper.

Meanwhile an American named John Colvin is recovering in the hospital after being beaten up. Colvin has been trying to help the Sarkhanese learn how to use milk and its by-products, and he set up a milk-distribution center outside the capital city, Haidho. But he is betrayed by an old friend named Deong who has turned communist. Deong tells a group of Sarkhanese women that Colvin is trying to put a drug in the milk that would enable him to take advantage of Sarkhanese girls. Colvin denies it, but the women beat him. He is left unconscious on the steps of the U.S. Embassy.

The ambassador complains about the...

More summaries and resources for teaching or studying The Ugly American.