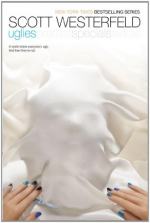 Scott Westerfeld
This Study Guide consists of approximately 27 pages of chapter summaries, quotes, character analysis, themes, and more - everything you need to sharpen your knowledge of Uglies.

Uglies by Scott Westerfeld is the first in a trilogy of novels set in a futuristic world in which everyone is surgically altered at the age of sixteen to be pretty. In this novel, Tally cannot wait until her birthday when she will be turned pretty and allowed to live in New Pretty Town with her best friend Peris from childhood. However, when Tally's new friend, Shay, runs away, Tally is told by Special Circumstances that she will remain ugly all her life unless she agrees to track down Shay and bring her back. Uglies is a novel that questions the idea of social pressure to be beautiful and the quest of young people to conform to one specific idea of normal.

Tally's constant companion and best friend, Peris, is three months older than her and therefore is given the operation to become pretty sooner than she. Tally misses Peris so much that she sneaks into New Pretty Town at the risk of great punishment to see him. Tally is nearly caught, causing her to have to make a dramatic escape from the roof of his building. As Tally rushes back to Uglyville, she runs into another ugly who has also snuck into New Pretty Town, Shay. With their similar circumstances and the loneliness of being the last of their friends to turn pretty, Tally and Shay become good friends.

Shay begins to question the need to become pretty and makes veiled comments about her desire to remain an ugly. Tally misses most of these comments because she cannot imagine anyone wanting to remain ugly. However, a short time before their shared birthday, Shay tells Tally she plans to run away to a place called the smoke, a community of people who have chosen to remain ugly. Tally refuses to accompany Shay. However, on Tally's birthday she is taken to Special Circumstances where Dr. Cable tells Tally that if she refuses to help them find Shay, she will be forced to remain ugly for life. Faced with a life as an outcast and the pleading of her friend, Peris, Tally finally agrees to make the trek to the Smoke and activate a special locator upon her arrival.

Tally makes the long, dangerous trip to the smoke alone, almost getting burned and falling off a cliff. Finally Tally makes it to the Smoke. At first Tally finds the people of the Smoke ugly and unbearable to look at, their habits of eating fresh meat and cutting down trees outrageous, and their ethic of hard work too difficult. After a while, however, Tally finds herself growing accustomed to these new ways of living and even finding enjoyment in some of it. When David, the son of the founders of the smoke, tells her how his parents ran away from the city because of knowledge that the city leaders were somehow altering people's minds as well as their bodies during the pretty operation, Tally knows she cannot betray these people. Unfortunately, when Tally destroys the locator, it automatically releases a signal.

Special Circumstances descends on the Smoke and arrests everyone in sight. Tally and David manage to escape. Together Tally and David return to the city in an attempt to rescue David's parents and others from the Smoke who have been taken there. Their rescue mission is successful, however, David's father has died in an experimental surgery. Soon after, David's mother finds a cure for the brain lesions inflicted during the initial pretty surgery, but cannot find a patient to test it on. For this reason, Tally agrees to allow herself to be turned pretty so that she can be the first test patient. Tally does this to make amends for bringing Special Circumstances to the Smoke.

More summaries and resources for teaching or studying Uglies.