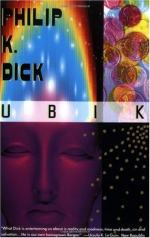 This detailed literature summary also contains Topics for Discussion and a Free Quiz on Ubik by Philip K. Dick.

Ubik is a science fiction novel written by Philip K. Dick. It follows the story of Joe Chip, a technician at Runciter Associates. When an explosion kills Joe Chip's boss, Glen Runciter, strange things begin to happen. Soon Joe realizes his boss did not die in the explosion, but he is in a state of half-life. If he wants to stay that way, he has to keep the evil Jory from eating his life energy.

The novel begins by detailing the disappearance of the dangerous telepath S. Dole Melipone. For Glen Runciter, this causes a major problem, and he visits his dead wife Ella at the Beloved Brethren Moratorium. She is in a state of half-life, but through headphones, Glen can still talk to her. He is just running through the problem when a young man called Jory invades her body. Angry, Runciter goes to see the manager of the Moratorium. The manager says there is nothing he can do.

Meanwhile the debt-ridden technician, Joe Chip, hears a knock at his apartment door. It is the Runciter scout G.G Ashwood and with him is a beautiful young lady named Pat Conley. Ashwood tells Joe that Pat possesses an unusually strong anti-telepath ability, and Joe should assess her. With Ashwood gone, Pat shows Joe a piece of paper proving he has already tested and failed her. She has now created a different present and if Joe passes, her she will help him get out of debt. On a test paper Joe draws a symbol meaning dangerous. He tells Pat the symbol means Runiciter should hire her immediately.

Runciter meets a woman called Zoe Wirt. Her boss, Shepard Howard, needs some anti-telepaths to rid his company of psychics. Runciter leaves her for a few moments and talks to his in-house psychic, Nina. She tells him Miss Wirt is lying and she works for Stanton Mick. This pleases Runciter, as he knows Mick is a very rich man, and Joe stands to make a lot of money. Back in the office, Miss Wirt says the job will take place on the planet Luna and lays out the conditions.

For the contract, Runciter decides to get together 11 anti-telepaths, including Pat Conley, plus himself and Joe Chip. Runciter is in his office familiarizing himself with the group when he suddenly finds himself outside an antique shop, looking at old coins. When he returns to the room, he finds only Pat, Joe and G.G still present. Even stranger, Pat and Joe are now married. Eventually, Pat admits she is just showing them her capabilities and takes them back to the original present.

The group leaves for Luna. Miss Wirt meets them on their arrival and takes them to a conference room where Joe Chip immediately starts taking a psi reading. Stanton Mick walks into the room and tells Joe to stop before floating to the center of the room and exploding. The blast kills Runciter. Joe and the others rush his body back to the ship, put him in coldpac and fly him to a Moratorium in Zurich.

On Al's advice, Joe stays at a hotel in Zurich and says he will send Wendy Wright to keep him company. However, when Joe wakes up in the morning, he is by himself. He goes to the phone to ring Al, but all he can hear is Runciter's voice. There is a knock and Joe opens the door to the Moratorium manager. The manager asks where Wendy Wright is and Joe says she never came. Thinking this strange, the manager searches the room. In the closet is Wendy's dead body.

Joe goes back to the Runciter offices in New York. Here Al shows him that all the coins and notes are now emblazoned with Runciter's profile. In addition, they are buying coffee and cigarettes that are already years old. Al and Joe decide to go to Baltimore to see if they can spend the Runciter currency. In a shop in Baltimore, the cashier takes the money, but the cigarettes they buy crumble in their hands. They go back into the shop and look at some of the other goods. In a big box of cigarettes, they find a note from Runciter. It tells them the situation they are in is serious.

Back in New York, Joe and Al are stepping into a lift when Al pulls Joe back. He says the elevator was not the usual one, but looked about 50 years old. Joe tells Al the elevator was normal and Al must be ill. In the bathroom they find another message from Runciter. It says he did not die from the blast, but they did. Al thinks he is dying the same way Wendy died, by regressing rapidly into old age. He says he has no chance for survival, but Joe will still live if he gets back with the others and stays with them.

Joe goes back to the room where they had earlier left the others watching TV, but no one is there. However, the television is still on and showing Runciter's funeral in Des Moines. Joe switches the television off, but it turns back on, this time Runciter's face appearing on the screen. He is advertising a product called Ubik, a spray that works to reverse deterioration. Suddenly Runciter begins to speak directly to Joe, telling him his only chance of survival is finding Ubik. He says he sent a sample to Joe's apartment.

When Joe gets back to his apartment, everything has regressed to what looks like the 1950s. In his post box, he finds a sample of Ubik, but instead of a spray can, it is nothing but old-fashioned medicine. At this point Joe knows he needs to get to Des Moines.

The funeral director Mr. Bliss picks Joe up from an airfield in Des Moines and takes him to the funeral. Mr. Bliss talks about Hitler, and Joe realizes it is now 1939. Joe is too late for the funeral, but drives back to the hotel with the others. On the way, a policeman stops them and hands Joe a ticket with a note from Runciter. It states that Pat Conley is big trouble. At the hotel, Joe starts to feel weak and Pat offers to escort him to his room. Joe refuses to take the elevator because of what Al saw earlier and insists they take the stairs instead. As he slowly makes his way, Pat taunts his efforts, claiming Ray Hollis hired her to kill Runciter and his best anti-telepaths. She leaves Joe outside his hotel room to die.

Joe eventually manages to open his room door where he sees Runciter sitting on a chair beside his bed. He sprays Joe with Ubik, restoring Joe's health, though he admits it is only temporary, and Joe needs to find more. Runciter goes onto say he is currently sitting in the Moratorium and Joe, along with the others, is in half-life. He blames all the problems on Pat, but when Joe questions him further Runciter admits he is lying and does not know what is happening.

Don Denny comes to Joe's hotel room with a doctor. Joe tells him what Runciter said and offers him the Ubik spray to restore his health. When Denny uses the spray, he evaporates and a young boy called Jory replaces him. He says he is a half-life that eats other people's energy so he can continue to exist and control the half-life world. Joe tries to kill Jory, but it proves impossible.

Joe takes a taxi to the Matador restaurant. On the way, he sees a young lady walking down the road and tells the driver to stop. The lady tells him she has nothing to do with Jory and hands Joe a certificate that guarantees him a lifetime supply of Ubik. She says her name is Ella Runciter. She is helping Joe because she is passing onto another life and needs him to keep her husband company.

Joe goes to a pharmacy to pick up his Ubik. However, the spray can has regressed to a box of useless powder. Joe says he knows the pharmacist is Jory and that he has spray cans in the shop. Jory appears, but Joe still cannot get any spray. Outside the pharmacist, a woman approaches him and hands him some Ubik, saying she works for the company, and Joe summoned her when he refused to accept that there was no spray.

Back in the Moratorium Mr. Runiciter tries in vain to find the manager, as he wants to have a chat with Ella. Finally, a worker brings out her casket. Runciter goes to hand him a tip, but on each of his coins is Joe Chip's profile.