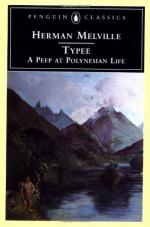 Herman Melville
This Study Guide consists of approximately 45 pages of chapter summaries, quotes, character analysis, themes, and more - everything you need to sharpen your knowledge of Typee.

This detailed literature summary also contains Topics for Discussion and a Free Quiz on Typee: A Peep at Polynesian Life [Edited by George Woodcock] by Herman Melville.

The narrator is a sailor on board a whaling ship that makes the island of Nukuheva. Since his name is never given, and due the detailed descriptions, it is suspected that the fiction has biographical elements. The narrator is sick of his ship and his captain after a six month voyage searching for sperm whales and the precious commodity, sperm oil. He decides to escape to the interior of the island and recruits a fellow sailor, the young and agile Toby. The narrator and Toby successfully escape their ship and endure a grueling series of days in the mountains of the island's interior. There are no fruit trees there and they are forced to seek a valley. They hope to reach the friendly valley of Happar, but instead reach the Typee valley, which is known as a home of violent cannibals.

Despite the sailors' fears, they are treated in a friendly manner and put under the protection of Chief Mehevi. The narrator takes the name Tommo and is given personal assistance by a native called Kory-Kory, a man of twenty-five years. Tommo's leg has some sort of disease that limits his ability to walk, and Kory-Kory takes him on his back. Soon, Tommo is relaxing at the palace of Chief (later called King) Mehevi, known as the Ti. The sailors are fed pork and a breadfruit concoction, not human flesh as they fear. Toby is allowed to try to go through the Happar valley to the French base in Nukuheva Bay, but is stopped by hostile Happar natives. Toby recovers and is allowed to walk down to the sea when a ship is reported to be in the Typee Bay, but he never returns. Tommo is now isolated, but forms a close relationship with his love-interest, Fayaway, and his helper Kory-Kory. The natives have the custom of two men marrying one woman, and there is some indications that this is the relationship of this threesome. Fayaway goes with Tommo on a boat on the central pond, contrary to the usual taboo of women being in canoes.

The stranger Marnoo arrives from another valley, and is allowed to go through Typee. Marnoo knows some English and Tommo hopes that Marnoo can help him escape, but this is not successful. There is tension as Happar natives fight the Typees, and in a second battle some Happars are killed. Tommo finds out with near certainty that their bodies are taken to the Ti and the Taboo Grounds and ceremonially eaten. He also sees natives playing with the severed and embalmed heads of men, one being that of a white men. Tommo's happiness is largely ruined by a tattoo expert who instigates other natives to demand that Tommo's face be tattooed. Marnoo comes back and warns Tommo that he is in danger of being killed. Tommo cannot escape, but then a small whaling boat comes with friendly natives. After much argument, and in a weakened condition, Tommo escapes by sea and recovers his health on a large ship.

More summaries and resources for teaching or studying Typee: A Peep at Polynesian Life [Edited by George Woodcock].