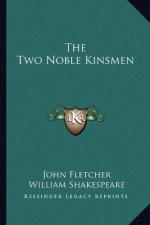 William Shakespeare
This Study Guide consists of approximately 31 pages of chapter summaries, quotes, character analysis, themes, and more - everything you need to sharpen your knowledge of The Two Noble Kinsmen.

The conflict between love and friendship dramatized in The Two Noble Kinsmen is not an issue limited to one period of human history or to one culture. Friendshipsparticularly those that begin in childhood or adolescencehave always been among the most meaningful relationships in a person's life. But what happens if two friends love the same person? Today such friends would probably stop short of trying to kill each other, but it's likely that anger and resentment would threaten their relationship. When a young man or woman becomes involved in a love affair, he or she will usually have less time to spend with old friends. Thus love may put a strain on friendship or limit its expression. On the other hand, the loved one may be jealous of the lover's old friends. The friendship between Theseus and Pirithous continues even after Theseus marries Hippolyta, and it seems apparent that she is not always confident that she is the most important person in her husband's life. Even when a couple is as rational as they are, doubts may arise about conflicting loyalties. Sometimes a friendship ends tragically, as with Emilia and Flavina (Emilia's childhood friend who died when the girls were eleven). How might this affect the surviving friend's outlook on life and love? Persons who die young are likely to be idealized, and those who survive may have difficulty establishing new friendships, because no one can ever measure up to the romantic images that live in our memories.

Emilia's nostalgic remembrance of Flavina (in I.iii) may indicate an unwillingness to let go of youthful innocence. As a person matures, the uncomplicated delights of childhood are replaced by concerns that burden our lives, or at least make them more problematic. Reluctance to let go of carefree days and take on the responsibilities of adulthood is a natural emotion. Yet movement from one stage of life to another is an inevitable consequence of human existence. Hippolyta seems to understand and accept this. Emilia does not, but it's hard for us to blame her. Maturity brings opportunities and experiences that are denied to children and adolescents. If one is fortunate, it also brings satisfaction or contentment. Some people may question whether these are acceptable substitutes for the uninhibited joy of childhood. But maturity is part of nature's design, and most people, like Hippolyta, accept it. That doesn't mean, however, that we will always face it without the same hesitation demonstrated by Emilia.

It's also hard to accept the idea that we have less control over our lives than we like to think we have. The Two Noble Kinsmen portrays a world in which human destiny is manipulated by impersonal or superhuman forces. Arcite seems to be a young man who knows what he wants and pursues it aggressively; he seizes opportunities and makes the most of them. He wins the tournament and gains Emilia, and then, because of some stroke of fate or intervention by the gods, he loses his life. The unpredictability of events and our inability to know what courses our lives will take can be frightening to contemplate. Theseus accepts, with sadness, what ever outcome the godsor fate or chancedecree, and he urges others to do so, too. Many people think that this is easier said than done. We'd like to believe that if life isn't predictable, at least it isn't arbitrary or unfair. Some readers see the death of Arcite as unjust. It may be that Palamon and Emilia were predestined to end up together. If we're unable to locate a pattern in human events, or in our own lives, does that mean there isn't one? Or does it perhaps mean that such patterns are hidden from human sight?

The play also seems to suggest that we are at the mercy of love unless we learn to channel our natural desires in ways that promote our personal wellbeing and benefit society. It's possible to look at the jailer's daughter as a pathetic example of what happens when love and sex rule our lives. Her obsession with Palamon leads her to endanger her father's job, run away from home, neglect her health, and even consider whether life is worth living without the man she loves. By contrast, Palamon and Arcite become bitter rivals and try to destroy each other because they are so overcome by Emilia's beauty. Hippolyta gives up her life as a warrior and subdues that part of her personality in order to marry Theseus. However, she appears content with the choices she has made. The lusty desires of the jailer's daughter are tamed and redirected, and she appears headed for marriage with her devoted wooer; but we don't see for ourselves how satisfied she is with her new role. By the end of the play, is Emilia content? If she had been given the choice of continuing to resist heterosexual love, would she have taken it rather than marrying one of the cousins? In the world of the play, she has no such choice, for society requires that she marry. Is there a wider range of possibilities for young men and women today than the ones available to the characters in The Two Noble Kinsmen?

More summaries and resources for teaching or studying The Two Noble Kinsmen.

The Two Noble Kinsmen from Gale. ©2005-2006 Thomson Gale, a part of the Thomson Corporation. All rights reserved.