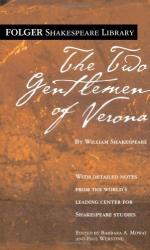 William Shakespeare
This Study Guide consists of approximately 29 pages of chapter summaries, quotes, character analysis, themes, and more - everything you need to sharpen your knowledge of Two Gentlemen of Verona.

In The Two Gentlemen of Verona, the principal charactersand some of the secondary ones as wellfeel compelled to act and speak in certain ways when they fall in love. The conventions of courtly love (a practice which flourished during the Middle Ages and influenced Renaissance literature) required such things as serenades, the frequent exchange of letters, and extravagant praise of one's beloved. Are young people today free to express love according to their individual natures, or is there a standard they have to follow? In the past, young women in love have had to act coy, as Julia does in I.ii, and mask their feelings. Additionally, society has not always encouraged young women to speak openly of their love; rather, they have had to indicate their feelings indirectly, as Silvia does in II.i with her comments on the letter Valentine has written for her. Do some of these conventions affect the way modern young people in love conduct themselves? Has the experience of romantic love changed significantly since Shakespeare's time?

Most commentators believe that The Two Gentlemen of Verona places a higher value on friend ship than on romantic love. They believe the play depicts Proteus's betrayal of Valentine as a worse sin than his betrayal of Julia. What would happen today if two young menor two young womenwho have been the closest of friends fell in love with the same person? Would one of them have to step aside, sacrificing love so that the friendship could continue? Or would the friendship come to an end?

The play also addresses the issue of constancy or faithfulness in love. Julia and Silviaand Launce, too, in his own wayrepresent constancy. Proteus, on the other hand, seems to fall in and out of love with very little justification. He's attracted to Silvia at least as much because of Valentine's praise of her as for her merits alone. He appears to believe that all men are vulnerable to beauty and that they are helpless to resist its power. Is it human nature, as Proteus claims, to be attracted to others even when one is already committed to an individual? Is it hopelessly idealistic to expect that one's partner will be faithful forever?

Another issue raised in the play is the relation between older and younger generations. When Antonio decides that the time has come for his son to leave home, his decision is final, and Proteus accepts thisperhaps in part because he's not alto gether unhappy at the prospect. But what happens when parents' choices for their children are not the ones the children would choose for themselves? The duke insists that his daughter marry Thurio, though he knows she detests him. Such tyrannical fathers are less common today. However, even in the late twentieth century, parents continue to attempt to influence the direction of their children's lives. Are young people today more inclined to defy their parents, as Silvia does? Does the tension between parental authority and their children's desire for independence necessarily lead to antagonism? Though the world has changed in countless ways since the sixteenth century, perhaps the conflict between gen erations is timeless.

More summaries and resources for teaching or studying Two Gentlemen of Verona.

Two Gentlemen of Verona from Gale. ©2005-2006 Thomson Gale, a part of the Thomson Corporation. All rights reserved.