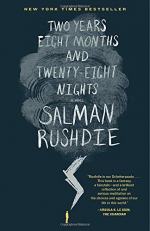 Two Years Eight Months and Twenty-Eight Nights is the tale of jinn coming to the human world after years of separation. It revolves around the Lightning Princess, a special jinnia who was fascinated with thinking men. She opened portals between the two worlds which led the dark jinn to take their boredom and malice out on humans. This time is known as the strangenesses, lasting 1001 days or two years, eight months, and 28 nights. A few hundred days into the strangenesses the War of the Worlds began. Dunia (the Lightning Princess) sought to defeat the dark jinn once and for all, but humans and the human world ended up being the weapons and the setting of that dispute.

Dunia had come to the human world in the 12th century to spend time with Ibn Rushd, a Spanish philosopher. They had dozens of children together, and Dunia prophesied that they would spread across the world, but she never revealed her identity. They named their children the Duniazat, marked by lobeless ears. And Ibn Rushd predicted that their descendants would be messengers, perceptive and sensitive individuals.

The novel also tells of Mr Geronimo, a gardener living in New York who discovered, after the great storm that marked the beginning of the strangenesses, that his feet no longer touched the ground. He was born in Bombay, his father a Catholic priest, and came to the U.S. after his uncle. He married Ella Elfenbein who was a young, energetic, and positive woman. They were very happy together until one day she was struck by lightning out of a clear sky and died. Mr Geronimo worked for decades on the estate of La Incoerenza, owned by the Lady Philosopher, and its garden was one of the most important things in his life, his opportunity to express his true self.

Ibn Rushd and an even older Persian philosopher, Ghazali, argued in their graves since Ibn Rushd was unable to complete his critique during his lifetime. Ghazali believed that god decides all that happens whereas Ibn Rushd argued for reason and science.

During the strangenesses, many unusual and apparently magical occurrences took place. Jimmy Kapoor met his own comic-book character when a wormhole opened in his bedroom. A mysterious baby with supernatural abilities surprised the mayor. Teresa Saca murdered her ex-beau with lightning streaming from her fingers. A man was spell-bound to fall in love with any woman. Mr Geronimo kept floating further from the ground. And all the while, Dunia began to gather the Duniazat and prepare them to fight in the war. Then the Grand Ifrits, the greatest of the dark jinn made their entrance into the human world.

Ghazali had freed Zumurrud, a Grand Ifrit, from a bottle and so he asked him to instill fear in humans as a ploy to make them seek the protection of god. Thus the dark jinn continued to cause havoc in the human world, on an even greater scale than what had already been happening.

Dunia visited Mr Geronimo to wake the jinn in him and found that he had the face of Ibn Rushd. She decided to fall in love with him for this and created the human shape of Ella for herself. The two travel to Peristan, the jinn world, when Mr Geronimo is kicked out of his apartment for purportedly having spread his levitation like a disease. When they arrived they found out that Dunia’s father, the king of Qâf, had been poisoned. They inspected the Chinese box that put a spell on him, and it told them a series of stories while peeling away its own layers. The stories were saddening and confusing, coming in quick succession and never coming to an end. A very high-pitched noise was emitted by the box, and this was the deathly spell. Mr Geronimo saved Dunia and Omar, but they were too late to save the king.

Now the war really got going as Dunia vowed to avenge her father and kill all the Grand Ifrits. She assigned Teresa to kill lower parasite-jinn, and gave Mr Geronimo the task of helping all those who had been forced to float or crouch. Zumurrud learned of Ghazali’s teachings and adopted his holy quest. Jimmy petrified lower jinn, while Dunia took the Ifrits down one by one. Mr Geronimo and the Lady Philosopher ended up writing a work of philosophy based in reason, tolerance, generosity, knowledge, and restraint which, the narrator (speaking from the future) shares, has become a cornerstone of modern society.