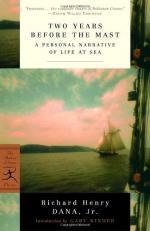 Richard Henry Dana, Jr.
This Study Guide consists of approximately 43 pages of chapter summaries, quotes, character analysis, themes, and more - everything you need to sharpen your knowledge of Two Years Before the Mast.

Two Years Before the Mast Summary & Study Guide includes comprehensive information and analysis to help you understand the book. This study guide contains the following sections:

This detailed literature summary also contains Topics for Discussion on Two Years Before the Mast by Richard Henry Dana, Jr..

Two Years before the Mast is Richard Henry Dana, Jr.'s memoir of a Harvard undergraduate becoming a sailor while collecting hides up and down the California coast and returning home in the treacherous dead of winter, richer for the experience.

Richard Henry Dana, Jr., signs up for a 2-3 year voyage aboard the commercial brig Pilgrim, hoping to cure his eyes, which have been weakened by reading books as a Harvard undergraduate. He goes aboard trying to look like a seasoned sailor, but writing afterward, he realizes that being a good sailor comes only with real experience. Dana's initiation comes by learning to climb the rigging while suffering seasickness. After three days he is ready to join in the monotonous routine of maintaining the ship and altering sails to fit weather conditions. After crossing the equator, Dana feels himself a true "son of Neptune," and while doubling Cape Horn, amidst violent storms, he proves his mettle. Towards the end of the outbound trip, as tempers rise in the crew, Dana and friend Ben Stimson move to the forecastle, where Dana feels more like a true sailor.

Pilgrim takes her place in collecting up and down the California coast a seemingly impossible quota of 40,000 hides. He learns enough Spanish to become the ship's contact with the locals. When Capt. Thompson flogs two sailors for no valid reason, Dana vows to bring Thompson to justice but admits the crew has no right to mutiny. Turned into a beachcomber and hide-curer while Pilgrim collects more hides, Dana is bored and anxious for Alert to arrive, as the company has ordered his transfer to assure a prompt return to Boston. Any longer delay will endanger his academic career. When informed that he must find a replacement for Pilgrim, Dana sticks by the company contract but in the end pays a man to exchange.

The return voyage in a heavily-loaded Alert takes place during winter when the forces of nature seek to keep her from slipping through their fingers. Dana suffers a debilitating toothache when the short-handed crew is hardest pressed. Alert survives and makes straight for Boston, for which Dana yearns—until he reaches the bay and finds himself strangely ambivalent, living in the adventure of the last two years and yet wanting to move on. Move on he does, becoming a lawyer, and publishing the first edition of his book. He adds, at readers' requests, descriptions of his return to California in 1859/60 and reveals the fate of characters and ships.

More summaries and resources for teaching or studying Two Years Before the Mast.

Two Years Before the Mast from BookRags. (c)2022 BookRags, Inc. All rights reserved.