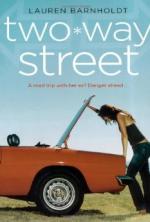 Lauren Barnholdt
This Study Guide consists of approximately 61 pages of chapter summaries, quotes, character analysis, themes, and more - everything you need to sharpen your knowledge of Two-way Street.

This detailed literature summary also contains Topics for Discussion and a Free Quiz on Two-way Street by Lauren Barnholdt.

Two Way Street is a story about Jordan and Courtney, a couple who have broken up but nevertheless still have to go on a road trip together from Florida to Boston, where they are both going to college. Courtney thinks Jordan does not care about her, but he actually still loves her. He only broke up with her to keep her from finding out that her father is having an affair. When Courtney finds out, she is furious. However, Jordan explains that he was trying to protect her from being hurt. They reach college and at first Courtney wants nothing to do with Jordan. When she realizes that he is hurting too, she finally manages to forgive him.

Courtney is annoyed that her parents are still making her go on the road trip with Jordan. She has planned out a strict schedule so that they will not have to talk to each other much. In the car, however, they are soon getting on each other's nerves, and Courtney desperately tries to pretend that she has moved on and is not upset. She eats a bad calzone to convince Jordan that nothing is wrong, but then gets food poisoning and is sick. Jordan insists on stopping at a hotel, where he does his best to look after Courtney. Meanwhile, Jordan is still in love with Courtney and trying to hide it. He broke up with her because he found out his mother is having an affair with her father, and he did not want to have to tell her. He could not be with her while keeping such a big secret from her. Courtney's father has also been threatening and manipulating Jordan into silence. He now calls Jordan constantly to check up on how the trip is going.

When Jordan broke up with her, Courtney tried to get over him by kissing her friend Lloyd. She does not have romantic feelings for Lloyd, but now Lloyd believes that they are in a relationship. Jordan and Courtney are planning to stop off at Middleton on the way where Jordan's brother and Lloyd attend college. Courtney is dreading having to tell Lloyd that she does not want to be with him. She avoids doing this on the phone, trying to make Jordan jealous by pretending that she loves Lloyd instead.

When they get to Middleton, Courtney goes to Lloyd's room. However, she realizes that she has been using Lloyd and is overwhelmed by emotion. She quickly leaves. Meanwhile, Jordan has been kicked out of his brother's room. His brother is angry that Jordan kept their mother's affair a secret. Now Courtney has also found out the truth about Jordan's fake girlfriend. Jordan is sick of the problems caused by keeping the secret and so he decides to tell Courtney the truth. However, Courtney's father calls her first and tells her everything. She is furious that Jordan lied to her and books a room at a motel so that she can be alone.

The next morning Jordan picks her up and they continue their trip. Jordan tries to apologize but Courtney will not listen. When they reach college, she shuts her door in his face. She flirts with a different guy at breakfast the next day. Jordan leaves a message on her phone to say that he is done. She angrily goes to his room to tell him that this is her decision and not his to make. She lets him explain his side of things and then somehow manages to forgive him. He persuades her to stop running from her problems and to call Lloyd and her father back so that she can deal with how she feels about them. They kiss and decide to face the future together.

There are also flashback chapters in the story that show how Courtney and Jordan began dating after flirting at a party and how they fell in love. Jordan walks in on his mother with another man and then later finds out that the man is actually Courtney's dad. Courtney's father bullies him into keeping it secret, but the guilt of this begins to grow as Jordan falls in love with Courtney. Eventually, after she tells him she loves him on a trip to Miami, he decides that he should break up with her rather than keep lying to her, as he still does not want to hurt her with the truth.

Flashback chapters also explore Courtney's friends, B.J. and Jocelyn, as they begin hooking up and then start a relationship. They have a much more fiery relationship than Jordan and Courtney share, but although they argue more, they seem stronger because they are more open about their feelings. During the road trip, Jocelyn becomes suspicious that B.J. is seeing another girl and so she trails him in her car. He thinks he is being followed by someone who wants to hurt him, and considers calling the police. Eventually, they resolve their problem and decide to be completely honest with each other. This is how Jocelyn finds out that Jordan faked his new girlfriend and she immediately tells Courtney. B.J. and Jocelyn provide some comic relief as well as some occasional words of wisdom in the story.

More summaries and resources for teaching or studying Two-way Street.