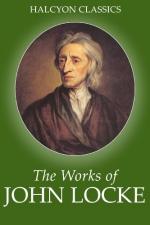 This detailed literature summary also contains Topics for Discussion and a Free Quiz on Two Treatises of Government by John Locke.

Two Treatises of Government is the book in which John Locke explains his concept of modern liberalism. In this book he expresses his belief that the purpose of political societies is to defend the life, liberty and property of citizens of that society. The only source of authority for a government is from the people. When a government becomes tyrannical, then people have the right to stage a revolution against that government.

Locke was writing in response to events that were occurring around him. He had just returned to England from exile in France and was incensed at the treatment of the Whigs by Charles II, who ruled under the pretext of absolutism and the divine right of rulers. These are two of the doctrines that Locke was opposed to and set out to destroy with his writings. Locke himself had been labeled a seditious agent of the Whigs.

Locke had not always been the radical he was labeled as by the king. He had always been quite conservative, but his father had fought against Charles I, in the Civil War and this is to what Locke's radicalism is attributed. When Charles II, was restored to the throne, Locke began his writing. He wrote many political essays during his time. Locke served as a member of the household of Lord Ashley, first Earl of Shaftesbury, who was very hostile to Charles II. Here, Locke learned about commerce in the American colonies and the slave trading companies.

Two Treatises of Government was a controversial book when it was published. The First Treatise was written when they still believed that they could peacefully bring about a change in the monarch. Locke did not yet promote the right for insurrection that he supported in the Second Treatise. That came about because of the crown's crackdown on dissenters and the treason trials, although much of it is attributed to Locke's reaction to Sir Robert Filmer's stance on absolutism.

Locke expounds his views of man based on freedom and equality. By nature, man drifts into communities and Locke talks about a social contract, which defines the state of civil society. The natural state is what was propagated by Filmore and denying that was basically viewed in the same terms as denying the authority of the Bible. This is one of the views that Locke reacted against when he wrote Two Treatises of Government.

Locke looks at the functioning of civil society and from where its authority and power are derivedm. The book is a study of political power and where it is derived from and is interesting reading for students of political science. It was the subject of quite a bit of controversy when it was first published, especially since he supported the view that the population had the right to revolt against tyranny.