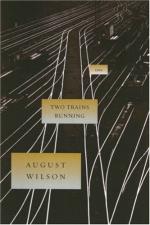 August Wilson
This Study Guide consists of approximately 28 pages of chapter summaries, quotes, character analysis, themes, and more - everything you need to sharpen your knowledge of Two Trains Running.

Wilson's Fences (1985) focuses on an ex-convict and baseball player who is locked in a desperate struggle with his son. Its sensitive depiction of themes which are widely supposed to be autobiographical has won it a place as one of the finest achievements in late-twentieth-century drama.

Dutchman (1964), by Amiri Baraka, is a stark and shocking depiction of a white woman's efforts to take sexual advantage of a black man.

In Beloved (1987), Toni Morrison's widely successful and influential novel about African American history and the supernatural, a black woman murders her own child to avoid her being returned to slavery.

James Baldwin's Tell Me How Long the Train's Been Gone (1968) is not one of the prolific author's most well-known novels, but it provides a powerful meditation on social and political change and the impact of celebrity and art on a black man's...