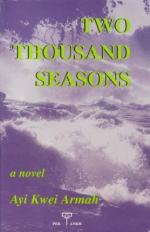 Ayi Kwei Armah
This Study Guide consists of approximately 36 pages of chapter summaries, quotes, character analysis, themes, and more - everything you need to sharpen your knowledge of Two Thousand Seasons.

In Two Thousand Seasons, author Ayi Kwei Armah gives readers an epic history of the African continent. As the title suggests, Two Thousand Seasons covers nearly as many years of history, focusing especially on slavery and its initial effects on a West African community. The plot of the novel is loose, and told from a nebulous first-person plural voice. This voice is reflective and looks back on the community’s history.

The novel opens with the chapter, “the way.” The speaker describes the spiritual way of life that his community follows. According to the speaker, “the way” is characterized by creation and regeneration; it emphasizes connectedness and movement. The speaker juxtaposes this “way” to the “disease of death, the white road” (12) brought by the “white destroyers” (13). In the chapter, “the way,” the speaker recalls a prophecy made by the spirit Anoa, which warned the community that someday they would lose their way and encounter something called slavery. The chapter ends with the speaker’s observation that they would not have long to wait.

“the way” is followed by a chapter titled “the ostentatious cripples.” The speaker recounts the appearance of the so-called “predators,” who are revealed to be Arab invaders. They rise to power backed by a group called “askaris,” natives who are hired as soldiers for the invading arabs. The speaker also refers to these askaris as “zombis.” The Arabs are lusty and greedy; many of them are killed by the women they keep as concubines. Hundreds of seasons pass and the locals are pushed further and further from the way.

In “the predators,” a second group of white predators arrive, eager to exploit the divisions already instilled in the community by the Arab predators. Abdallah, one of the new predators, begins to convert people to his religion, Islam. Rather than give up on the way, the community decides to leave and find a new home. Their journey takes them to the coast where, in “the destroyers,” they encounter white European men for the first time. The white men want access to land and slaves. In the fifth chapter, “the dance of love,” the white men intimidate the cowardly King Koranche. Rather than resist their power, King Koranche agrees to sell twenty people in the community, including the speaker, to the white colonial powers. With the twenty men and women aboard, the ship pulls away and heads down the river. They are kept under brutal conditions. However, when the ship begins to leak and the slaves must be taken into boats, they revolt, killing the white men.

In chapter six, “the return,” the former slaves decide to return to their community, where they intend to start afresh. They find Isanusi, who had cautioned them not to trust Koranche in the first place. Alongside Isanusi, they decide to live their lives more attuned to the way. Isanusi tells them about the thousands and thousands of seasons of their existence. With the help of a powerful local ruler named Kamuzu, they decide to revolt once more against King Koranche and the white European men. However, Kamuzu turns out to be power-hungry as well. The community of ex-slaves decides to liberate other slaves, intercepting and defeating the colonial ships trying to take slaves away. They succeed in freeing the captives.

In Chapter seven, “the voice,” one of the members of the community returns to Koranche’s court, thereby placing the entire community in peril. King Koranche sends three messengers to kill Isanusi. They do not succeed. Koranche accumulates new askari forces, and Isanusi dies in a battle between the two sides. For revenge, the community takes Koranche to a public place where Abena, one of the ex-slave women, shoots him dead. While the white destroyer community has begun to spread its religion and has built its own stone fortress in the region, the community vows to end destruction and promote creation.