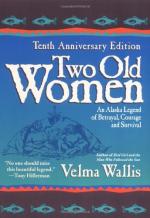 Velma Wallis
This Study Guide consists of approximately 25 pages of chapter summaries, quotes, character analysis, themes, and more - everything you need to sharpen your knowledge of Two Old Women.

This detailed literature summary also contains Topics for Discussion and a Free Quiz on Two Old Women: An Alaska Legend of Betrayal, Courage, and Survival by Velma Wallis.

The People are a tribe of Native Americans who live north of the Arctic Circle. This particular winter, The People are struggling to find enough food to avoid starvation. The Chief announces one day that it is time to move on in search of caribou, but this time they must leave behind two old women because they have become a drain on The People. These two old women, Sa' and Ch'idzigyaak, cannot believe that they are to be left to the mercy of the elements around them. Ch'idzigyaak especially, because she has a daughter and grandson in the tribe, is hurt beyond description. Before The People move on, Ch'idzigyaak's daughter gives her a babiche, and her grandson leaves his hatchet with her.

The People move on, and the two old women must decide whether they will try to survive or just resign themselves to a death sentence. Sa' talks Ch'idzigyaak into trying to survive or at least to "die trying." The women decide to try and return to a place they camped at many years ago because the place was fruitful and beautiful. It is quite a distance from where they begin, however. The journey takes six days of constant walking. The women pull makeshift sleds behind them with animal skins and their belongings. Because they are old, Sa' is 75 and Ch'idzigyaak is 80, their joints and muscles ache every night, and in the morning they feel they can't go on. Somehow, though, they manage to keep going, and on the sixth night they arrive at their destination.

They survive the winter, and in the spring they begin to prepare for the future in earnest. They trap muskrats, beavers, and rabbits. They smoke the meat to preserve it and make clothing and hats out of the skins of the animals. They catch great quantities of fish to preserve. They also gather firewood and stack it all around their camp for fuel for the winter.

Despite all their success, the women worry the younger generation will come back. They don't trust the younger generation at all because of what they did to them, and they fear that they will take all of their food or hurt them. So the old women move their camp to a less desirable location where there are lots of mosquitoes.

Meanwhile, The People have suffered terribly. They barely survive winter, and by the time they had found enough summer food to regain their energy and strength, winter was upon them again. Several of the children die from starvation, and the Chief still feels guilty about his order to leave the two old women behind. The People return to the camp where the two old women were abandoned and are surprised to see no traces of the women. The Chief sends some scouts out, including Daagoo, one of the older men in the tribe.

The People move near to the old women, and the old women furnish them with some food and clothing. The Chief comes to visit them, and he is slightly remorseful. After a while, there begins to be more contact between the two old women and The People. Ch'idzigyaak's grandson visits his grandmother daily, and this contact is most welcome to Ch'idzigyaak. She wants to see her daughter, but she is too proud to admit it, and her daughter is too ashamed to see her. Eventually, however, they overcome their hurt and shame, and Ch'idzigyaak tells her grandson to convey to his mother that she has no more hard feelings about the abandonment. They are reunited at last, and the two old women live several more years before dying happy women.

More summaries and resources for teaching or studying Two Old Women: An Alaska Legend of Betrayal, Courage, and Survival.