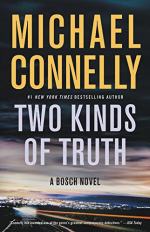 Michael Connelly
This Study Guide consists of approximately 45 pages of chapter summaries, quotes, character analysis, themes, and more - everything you need to sharpen your knowledge of Two Kinds of Truth.

This detailed literature summary also contains Quotes and a Free Quiz on Two Kinds of Truth by Michael Connelly.

The following edition of this book was used to create this study guide: Connelly, Michael. Two Kinds Of Truth: A Bosch Novel. Little, Brown and Company, 2017.

The grizzled, veteran detective Harry Bosch works as a volunteer detective in the tiny San Fernando police department, a handful of years after his unceremonious departure from his career-long employer, the Los Angeles Police Department. One day, at almost the same time, two urgent cases are dropped in Bosch's lap. He is due in court in less than two weeks because a murder suspect Bosch had helped sentence decades earlier, Preston Borders, now appears to have been wrongfully convicted due to new DNA evidence. Also, two independent pharmacists -- a father-son duo -- have been found shot dead in a local pharmacy. Bosch spends the next few days working around the clock, pursuing the murder case during the day while spending nights reviewing the new evidence in the Borders case. The files providing the new evidence are given to him by his old detective partner, Lucia Soto, who is still in the LAPD.

Together with the young detective Bella Lourdes in San Fernando, Bosch learns that the pharmacists were intentionally murdered by two hit men who are part of an organized "pill mill." The criminal organization effectively imprisons addicts who are addicted to painkillers, shuttling them around in unmarked vans and through small, no-security airports, filling bogus prescriptions for painkillers in as many pharmacies as possible. One of the San Fernando pharmacists had filed a letter of complaint to the California medical board, threatening to expose the bogus system of prescriptions, which prompted the criminal organization to carry out the hit.

On the advice of a DEA agent, Bosch goes undercover as a painkiller addict, visiting a known bogus doctor's office in pursuit of painkillers before being unceremoniously shuffled onto the vans and airplanes along with the other addicts. Between a few days of filling prescriptions up and down California, Bosch and the other addicts stay in a tent shantytown in the middle of the California desert. Bosch's cover is blown when a newspaper article about the Preston Borders case appears in the Los Angeles Times. Two of the pill mill bosses force Bosch to board an open-door plane, where they will presumably drop Bosch into the large inland saltwater lake, the Salton Sea. After Bosch is able to kill one of the men with a knife hidden in his prop cane, the second man simply jumps out of the plane. Bosch busts into the cockpit and hails the police over the radio. The entire operation is shut down within a few days, and the man Bosch killed in the plane is identified as a mid-level Belarusian criminal boss who was directing the operation from Belarus.

As Bosch prepared for his entry into the undercover realm, his lawyer Mickey Haller and Haller's personal investigator, nicknamed Cisco, are first at a loss at how to proceed with the case, in the face of seemingly rock-solid DNA evidence. Bosch learns that Preston Borders is accusing him of illegally planting evidence in the initial case. While Bosch knows that he conducted that case with integrity, and that he did not plant evidence, he is at a loss about how to prove it. However, the team eventually discovers a lead that establishes a connection between a civilian employee who works in the LAPD's evidence department, Terry Spencer, and Borders' new lawyer, Lance Cronyn. Heading in to the day in court, the team is able to establish evidence that Cronyn is extorting Spencer, and they subpoena Spencer. However they are unable to establish an explanation for how the new DNA evidence was planted.

In court, Haller is able to bluff around this gap in their knowledge brilliantly, and Cronyn and Borders quickly fold when Haller presents Spencer as a witness, to their great surprise. Even though Bosch's name is cleared -- with Borders returning to jail and Cronyn being arrested on the spot -- there is still a feeling of melancholy, as Bosch realizes that Haller had intentionally leaked the story about his potentially planting evidence to the Los Angeles Times. It turned out to be a calculated gamble by Haller: because Cronyn's side had apparently besmirched Bosch's name, Haller was allowed to proceed with his motion when he otherwise would not have been able to. Still, Bosch is uncomfortable with this murky moral compromise that was necessary to clear his name.

More summaries and resources for teaching or studying Two Kinds of Truth.