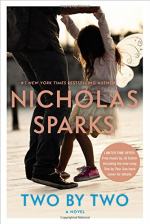 Nicholas Sparks
This Study Guide consists of approximately 45 pages of chapter summaries, quotes, character analysis, themes, and more - everything you need to sharpen your knowledge of Two by Two.

This detailed literature summary also contains Quotes and a Free Quiz on Two by Two by Nicholas Sparks.

Two by Two is a romance novel by Nicholas Sparks in which thirty-something Russell Green does his best to be a single parent to his six-year old daughter, London. He does this amid the backdrop of his divorce from London's mother (Vivian) and his new relationship with a former girlfriend (Emily). When the novel begins, Russell is married to stay-at-home mom, Vivian. Russell, Vivian, and London live close to Russell’s family in Charlotte. Russell is generous and romantic, Vivian is demanding and condescending. Despite this, Vivian seems committed to her marriage and her daughter. Things change quickly when Russell quits his marketing firm to begin his own marketing company. This enrages Vivian, and things begin to worsen between the two as Vivian’s shopping habits and condescending ways continue.

Vivian decides she will go back to work. She joins the real estate development firm of billionaire Walter Spannerman. Spannerman is a known womanizer who is branching out into politics. This worries Russell, who now has the primary responsibility of raising London while trying to grow his startup business. Russell has some difficulty getting a handle on the role reversals. However, soon both he and London take to it happily. Russell, despite the difficulties of balancing primary parenting responsibilities and work, is thrilled to have more time with London. His family, including sister Marge, are lovingly supportive of Russell. However, things continue to worsen between Russell and Vivian, as Vivian begins spending nights away from home. Eventually, Russell’s worst fears are confirmed she will be moving to Atlanta with Spannerman’s company when it relocates. She and Walter are in love. Vivian then leaves Russell and files for divorce.

Russell, meanwhile, hires his first client, Joey Taglieri, a lawyer, to represent him. Russell does not care about any monetary demands Vivian makes, but he wants joint custody of London. At the same time, Russell must now struggle with being a single dad. Step by step, he makes progress, and he and London grow closer. Russell begins speaking with Emily, an old girlfriend from many years ago. She is a single mom with a son named Bodhi. Bodhi is London’s age. Emily recognizes that Russell is a good father and he is clearly London's favorite parent. This, in turn, enrages Vivian, who pushes for full custody of London. Russell fights back, refusing to give ground. He is becoming stronger man. He and Emily also realize they have fallen in love with each other. Then, tragedy strikes when Marge, Russell's sister is diagnosed with advanced, incurable cancer.

Despite the bad blood between Vivian and Russell, Vivian is sad to hear of Marge’s condition. For the sake of London and Marge at Christmas, Vivian travels up to spend the holiday with them. During this time, Marge has a long talk with Vivian, telling her that London needs both her parents. This convinces Vivian to settle things with Russell out of court. She agrees to shared custody should Russell move to Atlanta. Russell agrees to do move. He is pleasantly surprised when Emily and Bodhi also move to Atlanta. Emily and her son live less than a mile away from Russell and London. Marge passes away, and Russell’s parents plan on moving to Atlanta to be close to Russell and London. Russell realizes that the relationships he has had with the women in his life, two by two –London, Marge, Emily, and others –have made him a better man.

More summaries and resources for teaching or studying Two by Two.