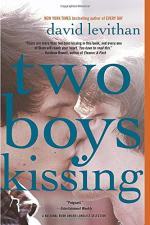 NOTE: Due to the structure of the novel, this study guide refers to sections and quotes by page numbers, using the Ember/Random House Teens 2015 First Paperback Edition.

“Two Boys Kissing” is a young adult gay romance novel by David Levithan which examines the relationships and hardships of contemporary gay youth. The entire novel is narrated by a chorus of unnamed gay men who have died from AIDS. They explain that things were incredibly difficult for them to live as gay men years before, but things still need to improve in the present day. The chorus narrates the events of the novel, which transpire over the course of a weekend.

Harry and Craig set out to break the world record for longest kiss. It will keep them occupied from Saturday through Sunday. Complicating things is that Harry and Craig used to be a couple, but no longer are. They decide to break the record in public on their high school’s front lawn. Harry’s parents are among those who gather together to cheer the two boys on. Craig’s parents do not know he is gay. They are angered not because Craig is gay, but because he did not tell them in some other way and lied about where he would be through the weekend. The kiss is not only meant to break a record, but to call attention to the intolerance still suffered in some places by gays. Craig and Harry have a gay black friend named Tariq who was viciously beat up in a neighboring town three months before for being gay. Eventually, hundreds of people gather to either cheer or jeer, and the news outlets pick up the story. Harry and Craig successfully break the record.

Meanwhile. Avery and Ryan meet for the first time at a gay prom. They hit it off instantly, and begin seeing one another. While Avery does his best to be understanding and forgiving of people who cannot accept that he is gay, Ryan is very angry about people who do not accept that he is gay. While out on a date, Avery and Ryan are bullied by four kids from Ryan’s school. Ryan wants to seek revenge on them, but Avery just wants to let it go. The chorus reminds readers that life cannot be lived in anger, and that anger must be moved past to get on to better things.

Meanwhile, Neil and Peter are in a committed relationship. Neil’s parents have accepted that Neil is gay, but they haven’t acknowledged it to Neil’s satisfaction. While listening to the news on the radio, Neil’s parents inadvertently leave the radio on, allowing a talk-show featuring anti-gay comments to play out. Neil is enraged, and demands his parents acknowledge he is gay. His parents do as Neil demands.

At the same time, Cooper feels lost, alone, and sad. He is secretly gay, and hides it from everyone at home and everyone at school. Friday night, Cooper falls asleep with his laptop open, leaving exposed his secret communications with other gays. His father finds it and is enraged. He screams at Cooper, shoves him into a wall, and causes Cooper to run away. In distress, Cooper finds a random guy on a sex dating website to have sex with, then spends the night in the back of his car. He ignores all text messages from his parents, ruins all his social media accounts, throws his phone in the river, and prepares to commit suicide by jumping from a bridge. He is stopped at the last second by numerous passers-by, including a police officer who tells Cooper it is his lucky day, even if he doesn’t realize it yet. The chorus reminds Cooper, and the reader, that life is worth living for, not dying for. The chorus also reminds readers that they must stick around to meet their future selves.