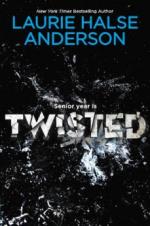 Laurie Halse Anderson
This Study Guide consists of approximately 30 pages of chapter summaries, quotes, character analysis, themes, and more - everything you need to sharpen your knowledge of Twisted.

This detailed literature summary also contains Topics for Discussion and a Free Quiz on Twisted by Laurie Halse Anderson.

Tyler is the narrator of Twisted. He considers himself an unpopular kid entering his senior year of high school who is constantly struggling with suicidal thoughts. He has always been a small guy who is teased mercilessly and hence he tries to stay under the radar. However, he decides to make a name for himself and uses graffiti to do so. However, he is caught for this behavior and put on probation. He has to do community service. This leads to him beefing up and taking on a whole new body look. This in turn, leads to Tyler gaining the attention of Bethany, the Queen Bee of the high school. Tyler is enamored with Bethany and enjoys her attention and continues to daydream about being with her. Bethany's twin brother, Chip, a jock and super popular guy, however continues to try to make Tyler's life miserable.

Tyler continues to struggle with school, his family. and gaining more attention from Bethany, when she invites him to a huge party after a football game on Halloween. He shows up late because he has to walk to get there and she is already wasted. At the party she puts the move on, but he decides not to take advantage and does not go further with it. She is furious and stomps away from him, calling him names. As the party turns into a brawl, Tyler finds her and then sees Chip slumped over in his car, so he drives them and Chip's friend, Parker, home. During the drive, Parker and Bethany start making out in the backseat. Tyler is furious and tries to stop it, but they won't and he leaves them in the driveway of Chip and Bethany's house and walks home.

The next day pictures of Bethany appear on the Internet of her posed and naked. Tyler is suspected and the police show up. Tyler's father is outraged because Bethany's father is his boss. The school shuns him and he is suspended from interacting with other students to avoid conflicts while the investigation is taking place. Tyler continues to contemplate suicide as his life tumbles out of control.

Finally, he decides to run away on his 18th birthday. However, he gets his father's gun and actually puts it in his mouth, but decides not to go through with it. He calls his friend Yoda and they go to a batting cage for Tyler to work out some energy and then Tyler throws the gun and bullets in the river. He decides to take control of his life, re-does his school schedule, sees his probation officer and heads home. The police show up and confirm his innocence which is pleasing to his mom and sister. However, the happiness doesn't last long, as his father shows up.

His father has lost his job and blames Tyler. There is a blow-up at the house, but Tyler stands his ground with his father. He then spends the evening at his friend, Yoda's house. In the morning, when he goes home, his father is sitting on the porch outside the house. They speak a bit and make some progress. They have breakfast together and hug. His father says that he will try to do better. Tyler see progress happening in his life and wants to make wise choices moving forward.

More summaries and resources for teaching or studying Twisted.