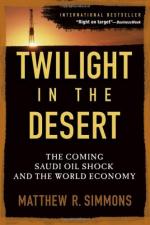 Matthew Simmons
This Study Guide consists of approximately 31 pages of chapter summaries, quotes, character analysis, themes, and more - everything you need to sharpen your knowledge of Twilight in the Desert.

Twilight in the Desert Summary & Study Guide includes comprehensive information and analysis to help you understand the book. This study guide contains the following sections:

This detailed literature summary also contains Topics for Discussion and a Free Quiz on Twilight in the Desert by Matthew Simmons.

Twilight in the Desert: The Coming Saudi Oil Shock and the World Economy was written by Matthew Simmons, an investment banker from Houston, Texas, who specializes in the energy industry. Simmons believes that Saudi Arabia, the world's single most important oil producing country, is running out of oil, and no one is prepared to deal with the impact. Saudi Arabia claims to have the situation under control and ensures the world that the country can provide the world with however much oil it will need for the next fifty years. Saudi Arabian oil production data has been concealed for more than twenty years now, and Simmons believes this is an attempt to hide the fact that Saudi Arabia's most important oilfields are declining. In the absence of this crucial data, Simmons uses more than 200 technical papers written for the Society of Petroleum Engineers over the past few decades to build a persuasive case.

Oil production in Saudi Arabia has remained strong and steady for more than thirty years. Although numerous reserves have been discovered over the years, only a handful of reserves provide the bulk of Saudi Arabia's oil. All of these most productive fields are now quite old and, as oil reserve history in other countries has shown, aging oil reserves reach their peak and then suffer a severe decline. Specific data on production levels at Saudi Arabia's oilfields have been concealed since the early 1980s, so no one other than Saudi Arabian officials really knows how much oil is actually being produced. Saudi officials claim they have no problems with providing as much oil as the world needs, but technical documents indicate there are many problems facing the Saudi Arabian oil industry. Through an extensive review of more than 200 technical papers written for publication or presentation through the Society of Petroleum Engineers, an abundance of papers describing numerous technical issues facing Saudi Arabia's major oil producing fields are found. Many of these papers are written by oil experts working for Saudi Aramco, the kingdom's national oil company. Through these papers, a convincing case concerning the future of oil production in Saudi Arabia is built.

With Saudi Arabia's aging fields and no new significant reserve discoveries in recent history, what will happen when Saudi Arabia's key reserves decline and there are no new reserves to replace them? How will the world, which is clearly not prepared for the coming Saudi oil shock, deal with this global energy crisis?

More summaries and resources for teaching or studying Twilight in the Desert.

Twilight in the Desert from BookRags. (c)2022 BookRags, Inc. All rights reserved.