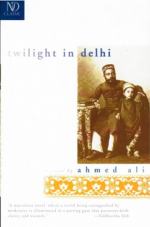 Ahmed Ali
This Study Guide consists of approximately 69 pages of chapter summaries, quotes, character analysis, themes, and more - everything you need to sharpen your knowledge of Twilight in Delhi.

This detailed literature summary also contains Quotes and a Free Quiz on Twilight in Delhi by Ahmed Ali.

Twilight in Delhi, by Ahmed Ali, is a historical novel. The story focuses on Mir Nihal and his family as changes occur in their personal lives and in Indian culture. As Mir Nihal faces his own challenges due to the personal changes he undergoes, his son Asghar goes through dramatic changes as well. Asghar's marriage is not turning out to be the marriage of his dreams as he had expected. Along with this, India itself undergoes a change of its own as England's King George is crowned the ruler of a newly conquered India. Like Mir Nihal's life, the former glory of Delhi fades into the twilight.

On a hot, summer evening, Mir Nihal comes home to find his wife awake and wanting to talk about the marriages of their two children. As Mir Nihal discusses why his son, Asghar, must be married first, he finds a snake in the house of his prized pigeons. After easily killing the snake, Mir Nihal finishes his conversation just as Asghar enters the house. Upon noticing Asghar's English boots, Mir Nihal is offended and berates Asghar. Asghar leaves before an argument can begin. He goes to the roof to sleep and dream of his beloved, a girl from a lower social class named Bilqeece. Asghar is so intent on marrying her that he becomes lovelorn and sends for his older sister, Begam Waheed, to come home and help him arrange his marriage. Once she arrives, Asghar indicates that if he cannot have Bilqeece, then he will have no choice but to commit suicide. Out of worry for her brother, Begam Waheed goes to Begam Nihal, their mother, to ask for help in getting Mir Nihal's blessing for the marriage. After a lengthy discussion over the fact that Bilqeece comes from a lower class family and therefore the marriage would not be approved of, Begam Nihal concedes that she will aid in Asghar's cause as she does not want her son to hurt himself. Begam Nihal goes to Mir Nihal, but he instantly becomes angry at the thought of Asghar ruining the family reputation and leaves the house. The servant Dilchain overhears this and tells Begam Nihal's sister in law, Begam Jamal, who instantly gloats over this to Begam Nihal. Begam Nihal becomes slightly angry, but Begam Jamal is helpful as well, telling Begam Nihal that the marriage can still be arranged even without Mir Nihal's blessing.

Asghar goes to visit his mistress, Mushtari Bai, with a friend of his. The friend tells Mushtari Bai that Asghar is in love with Bilqeece, which hurts Mushtari Bai's feelings as she is in love with Asghar herself. After spending some time with Mushtari Bai, Asghar goes home to hear the outcome of Begam Waheed's help. He is ecstatic that he now has his mother's help in marrying Bilqeece. Begam Waheed suggests that Asghar go with her back to her home in Bhopal so that he can wait out the year before he can marry Bilqeece.

Some time later, on another hot evening, Mir Nihal arrives at home again to find his family stricken with heat sickness. After he helps his family, he checks on his pigeons to find that quite a few of them have died. He purchases new ones from the local marketplace and brings them home to put with his other pigeons. As he is doing this, one of his servants comes to him with news that his mistress, Babban Jan, is close to death. Upon hearing this, Mir Nihal hurries to her home, leaving the pigeon coop unlocked. Mir Nihal arrives at Babban Jan's house to find that she has been dead less than half an hour. He takes one last look at her before giving her mother some money before going home. Once at home, he goes to check on his pigeons only to find that they have been murdered by a stray cat. Despondent over the loss the loss of his birds and his mistress, Mir Nihal decides that the best thing to do would be to retire and to allow Asghar to make his own decisions about marrying Bilqeece.

Since Mir Nihal has retired, he spends most of his days studying alchemy, one of his old hobbies. During this time, the coronation of King George of Britain occurs. Mir Nihal, his other son Habbiddudin, and others of the family go to the parade, but Mir Nihal has a flashback of the violence that occurred as the British took over the country. Mir Nihal decides to walk home by himself and along the way he comes across a beggar who happens to be a member of the recently deposed royal family. Mir Nihal pities the man and gives him some money before continuing his walk home to ponder over the major changes in his life.

Asghar and Bilqeece get married in a celebration that occurs over the course of a few days. The only hitch in the process is when one of Asghar's family members insults one of Bilqeece's. However, the altercation only lasts a few moments. At the end of the rituals, Bilqeece and her family feel extreme sadness over the fact that she is leaving them to be with Asghar. The marriage begins unsteadily, with Bilqeece feeling uncomfortable being with Asghar and remaining silent with his family. After a while, she tries to fit in, even cooking Mir Nihal's favorite food for which he gives her green sateen in return. Due to her uneasiness, Asghar wonders if there is any romantic spark between them, but his fears are soon alleviated once Bilqeece opens up and begins talking about Asghar getting a job and dreams of a home of their own. They do and fill it with English items, which brings about criticism from others, but Asghar and Bilqeece are happy and do not care. Shortly afterwards, they have a daughter, Jehan Ara, but Bilqeece's father passes away, causing Bilqeece to go into depression. This depression worsens as Asghar's feelings towards Bilqeece change and he often mistreats her because he no longer loves her as he once did.

Over time, Bilqeece gets worse, but this is actually due to tuberculosis. She gets better for a while, but dies a short time later, leaving Asghar to care for their daughter. Bilqeece's younger sister, Zohra, helps Asghar to care for the child, but Asghar becomes infatuated with Zohra. At first the feelig is not mutual, but after a while, Zohra is infatuated with Asghar as well. They keep the relationship a secret for a while, but Asghar goes to talk to his parents about marrying her. They agree, but before anyone can talk to Zohra's mother, Begam Jamal talks to her instead. This causes Zohra's mother to become upset especially as she has seen how Asghar treated Bilqeece while she was alive therefore she refuses to accept Asghar's marriage proposal. Asghar's brother Habibuddin comes home as he is very sick. Mir Nihal is practically an invalid as he watches Delhi disintegrate into violent chaos as Indian revolutionaries try to once again battle the British. Habibuddin worsens and dies shortly after coming home. After his funeral, Asghar comes home to find Zohra's servant waiting for him. She gives him a letter from Zohra saying that she has found out that her family is marring her to someone else first thing in the morning, leaving Asghar broken hearted. Mir Nihal goes back to his room as he ponders over all of the death and negativity that has happened in his life. He slips into a coma and dies.

More summaries and resources for teaching or studying Twilight in Delhi .