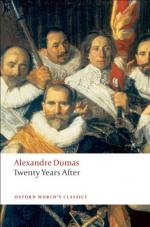 The novel "Twenty Years After" by Alexandre Dumas tells the story of the reunion of d'Artagnan and his three musketeers two decades after their original conquests. The story touches on the themes of friendship and the opposing forces of love versus hate and betrayal versus loyalty. As the plot progresses, the four friends deal with their disappointments in their lives as well as their diverse opinions on working together.

The story begins as d'Artagnan, happy to be of use again after years of inactivity, agrees to help Mazarin, the tyrannical cardinal whose laws have left the common citizens of Paris in poverty and famine. D'Artagnan tries to gather his three friends who fought by his side twenty years earlier, but realizes he has a problem when the four find themselves divided on their political allegiance. Despite their differences, the four vow to remain friends and often come to each other's rescue during the book as a result of their division. They also work together in a failed attempt to save Charles, King of England, from execution.

During the action in the novel, the musketeers are pursued by a regrettable part of their past. The son of a lady whom they were responsible for killing because of her evil, murderous ways, seeks revenge on the four friends. The man, who calls himself Mordaunt, has devoted his life to hunting down and destroying the men who killed his mother. The four friends are able to outsmart Mordaunt however and the fiend is finally killed by Athos as he tries to drown Athos.

By the end of the novel, the musketeers are able to convince Mazarin, by kidnapping him, to agree to the demands made by the people of Paris, thus brining peace to the city. D'Artagnan is awarded a monetary allowance, the title of captain, and a group of musketeers in his charge. Porthos gets his coveted title of baron. Aramis is able to get honors for a lady friend of his and Raoul, the son of Athos, is given an appointment to a regiment in the army. The musketeers, with the exception of d'Artagnan, go back to their former lives. D'Artagnan, however, waits for the next great adventure.