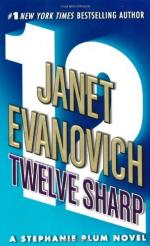 Janet Evanovich
This Study Guide consists of approximately 41 pages of chapter summaries, quotes, character analysis, themes, and more - everything you need to sharpen your knowledge of Twelve Sharp.

This detailed literature summary also contains Topics for Discussion and a Free Quiz on Twelve Sharp by Janet Evanovich.

Twelve Sharp is a Stephanie Plum novel by Janet Evanovich. Stephanie is a bounty hunter, but not a very good one. Not only this, but Stephanie is in love with two different men. One is Joe Morelli, a guy Stephanie has known since childhood, a guy who wants to marry her. The other is Ranger, a dark and mysterious bounty hunter who only wants one thing from Stephanie. When Ranger finds himself in trouble, Stephanie jumps at the chance to help, but helping Ranger means forcing herself to make a choice between love and commitment. It is not a choice Stephanie finds easy to make, especially when there is a crazy Ranger-want-to-be muddying up the waters. Twelve Sharp is part mystery, part romance, and completely entertaining.

A woman, Carmen, approaches Stephanie outside the bond office and claims to be Ranger's wife. Since Stephanie knows her friend Ranger has a commitment phobia, she does not immediately believe Carmen. However, Carmen is convincing, especially when she pulls a gun and tries to shoot Stephanie. Stephanie has Connie run a check on Carmen and learns she is married to someone using Ranger's name. This same day Stephanie learns Ranger has been accused of kidnapping his daughter, a daughter few people know about, from her school in Florida.

Stephanie knows Ranger would only kidnap his daughter if he thought he was protecting her. However, when Stephanie tries to call Ranger, he will not answer his phone or return her calls. After Carmen is found dead, Stephanie decides to go to Ranger's apartment and search his computer to see if she can find anything that will help her there. Stephanie finds nothing but two pictures of a stranger who bears a strong resemblance to Ranger. This confirms what Stephanie has already suspected, that there is someone pretending to be Ranger committing crimes in his name.

Stephanie returns to her apartment with these pictures and finds Ranger there. Ranger is wanted by the FBI so he cannot go home. Stephanie agrees to allow him to stay with her. This creates a new source of trouble for Stephanie who is involved with her childhood sweetheart, but also has strong feelings for Ranger. It also does not help that Ranger insists on sleeping in her bed with her. While struggling with this uncomfortable situation, Stephanie and Ranger go to Virginia to see if they can find a link between Carmen and this fake Ranger. While investigating the mall where Carmen's husband was reported to have worked, Stephanie learns that this man, Edward Scrog, was obsessed with Ranger after seeing him make an arrest in a music store where he once worked.

Ranger realizes Scrog wants to take over his life and therefore it seems reasonable to assume he will be coming after Stephanie. Ranger arranges for his men to follow Stephanie everywhere she goes, including following her as she apprehends her bond jumpers. In fact, there is one occasion when Ranger and his men help Stephanie arrest a particularly reluctant fugitive. Finally Scrog makes contact. Scrog instructs Stephanie to meet him in a parking garage. Ranger puts a tracking device on Stephanie and sends her to meet Scrog in the hopes it will lead them to Julie, his daughter. However, Scrog finds the tracking device and gets rid of it before taking Stephanie away with him. Scrog takes Stephanie to Julie. Stephanie is relieved to see Julie is safe, but there is little she can do to rescue her at this point.

The next morning, Scrog straps a bomb to Stephanie's chest and insists on taking her with him in an attempt to find money. Stephanie suggests they take down a high bond fugitive for the money the bondsman would pay. While trying to take down the fugitive, Stephanie and Scrog run into another bounty hunter. During the altercation which follows, Stephanie gets away from Scrog. However, before they can reach Julie, Scrog returns and takes her away. Stephanie steps back and lets the police and Ranger's people take over the investigation.

Stephanie goes home only to find Scrog there waiting for her. Scrog knows Ranger has been staying with Stephanie and he plans to wait there until Ranger returns. Stephanie tries to convince him Ranger has moved out. Scrog does not believe her. Before long the door to her apartment opens and Stephanie cannot be sure if it is Ranger or her boyfriend, Morelli. Stephanie wants to call out to warn whoever it is, but Scrog threatens to kill Julie if she does. When Ranger appears around the corner, Stephanie is forced to watch as Scrog shoots him point blank. Julie too is horrified by the sight. However, instead of falling into silent shock, Julie rushes Scrog, knocks his gun free, and shoots him. Ranger survives and Julie is reunited with her family in Florida. Stephanie, however, finds she is no better off now than she was before. Waiting to see which of her lovers would come into the room and face Scrog made her realize she was in love with both.

More summaries and resources for teaching or studying Twelve Sharp.