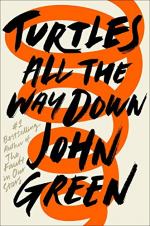 Turtles All the Way Down Summary & Study Guide

Green, John
This Study Guide consists of approximately 48 pages of chapter summaries, quotes, character analysis, themes, and more - everything you need to sharpen your knowledge of Turtles All the Way Down.

Turtles All the Way Down Summary & Study Guide Description

Turtles All the Way Down Summary & Study Guide includes comprehensive information and analysis to help you understand the book. This study guide contains the following sections:

This detailed literature summary also contains Quotes and a Free Quiz on Turtles All the Way Down by Green, John.

The following version of this book was used to create this study guide: Green, John. Turtles All the Way Down. Dutton Books, 2017.

Aza Holmes, a 16 year-old junior at Indianapolis' White River High School, is having lunch with her friends (Daisy and Mychal) when she finds herself preoccupied by her chronic anxiety. Daisy tells Aza that Russell Pickett, a local billionaire, has gone missing and there is a $100,000 reward for information pertaining to his whereabouts. Daisy believes she and Aza have a chance at this money because Aza used to go to camp with Davis Pickett, Russell's son. Aza is only half-listening to Daisy because her anxious thoughts are spiraling out of control as she picks at a callus on her finger and worries about contracting a bacterial infection. Aza regularly picks at the callus. Then, she obsessively cleans it and covers it with a Band-Aid, often repeating the process several times as a nervous tic.

Daisy and Aza visit Davis Pickett and begin collecting clues about his father's disappearance. Aza gives Davis her phone number, and they begin texting. Aza and Daisy learn that Russell Pickett was hired by the city to redirect some sewer lines near a creek called Pogue's Run, but the work was never finished. Nevertheless, his company was hired to take on the project a second time, and authorities discovered he was bribing the commission responsible for the work. He is on the run to escape prosecution. They also learn that Pickett has willed his entire estate to his pet tuatara, a lizard-like creature he keeps on his palatial estate. Aza sees her psychiatrist, Dr. Singh, and admits she is not taking her medication. After they go on a date, Davis gives Aza $100,000 in cash, telling her that if she continues seeing him, he will know she was not only interested in him for the reward money. Davis' younger brother gives Aza the notes from Russell Pickett's cell phone, retrieved from the cloud. She wonders about one in particular that says “The jogger's mouth” (116).

While attempting to take the money to the bank with Daisy, Aza suffers a crippling anxiety attack (a.k.a. “thought spiral” (8)) in the car as she wonders when she last cleaned her callus. Aza and Daisy quarrel about the money, as Daisy wants to spend some of it, and Aza thinks it should be saved. Aza sees Davis again and they kiss, but Aza suffers another anxiety attack afterwards, as she imagines all of the bacteria from Davis' mouth infecting her with something. She tries to tell him she cannot see him anymore, but he insists that they will just take things slow. Davis' brother Noah gets in trouble for bringing drugs to school; he is acting out because he misses his father. Davis and Aza try kissing again, but she becomes so upset that she goes into his bathroom and drinks hand sanitizer in an attempt to neutralize any potential bacteria in her mouth.

Aza visits Daisy's blog where she writes Star Wars fan fiction, and discovers that Daisy has written a character who is consumed by fear and anxiety. Aza feels this character is based on her, and confronts Daisy about it while they are in the car. Daisy explains that it is difficult being Aza's friend because her illness makes her so self-centered. She challenges Aza to recall her parents' names or to tell what they do for a living, but Aza cannot do either. Flustered, Aza wrecks the car. The car belonged to her deceased father and she keeps his cell phone in the trunk. When she gets out of the car, injured and dazed, she retrieves the phone and finds the screen cracked, and immediately faints. She wakes up in the hospital.

The doctor tells Aza she has a lacerated liver and will need to stay in the hospital for a few days. Aza becomes consumed with thoughts of a bacterial infection, drinks the hand sanitizer in her hospital room, and vomits. After observing this, Aza's mother calls for the doctor. Dr. Singh visits Aza throughout her stay and promises they will find a medication that works for her, but she will have to take it. When Aza gets out of the hospital, she and Daisy make up. Aza promises to be a better friend. She sees Davis, but discovers she cannot even sit next to him comfortably, and knows they will have to break up. Daisy invites Aza to an art show that is taking place in the sewers below the city that will feature a piece made by their friend Mychal.

At the show, Aza and Daisy walk through the sewer system. There is a terrible smell, and Aza has a revelation. They are near Pogue's Run, perhaps that is what Russell Pickett meant by “The jogger's mouth” (116). She sees Davis and tells him that she believes his father is dead and his body is in Pogue's Run. Davis cries. They do not see each other for several months, then one day Aza sees a story about the discovery of Pickett's body in Pogue's Run on the news. Davis comes over and tells Aza that he and Noah made an anonymous tip. Because Pickett can now be declared legally dead, his estate will be going to the tuatara, but the Pickett boys finally have closure. They are moving to Colorado, and Davis gives Aza a painting she admired in his house; the painting features a spiral.

More summaries and resources for teaching or studying Turtles All the Way Down.

Turtles All the Way Down from BookRags. (c)2022 BookRags, Inc. All rights reserved.