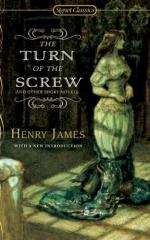 Introduction & Overview of The Turn of the Screw

Henry James
This Study Guide consists of approximately 87 pages of chapter summaries, quotes, character analysis, themes, and more - everything you need to sharpen your knowledge of The Turn of the Screw.

The Turn of the Screw Summary & Study Guide Description

The Turn of the Screw Summary & Study Guide includes comprehensive information and analysis to help you understand the book. This study guide contains the following sections:

This detailed literature summary also contains Bibliography and a Free Quiz on The Turn of the Screw by Henry James.

Henry James's The Turn of the Screw has inspired a divided critical debate, the likes of which the literary world has rarely seen. When the short novel was first published in 1898, it was published in three different versions, as a serial in Collier's Weekly and in book form with another tale, in both American and English editions. James later revised the story and published it in 1908 in the twelfth volume of the New York Edition of The Novels and Tales of Henry James. It is the 1908 version that the author preferred and to which most modern critics refer. However, no matter what version readers encounter, they may find themselves falling into one of two camps supported by critics to this day. Either the story is an excellent example of the type of ghost story that was popular at the end of the nineteenth century or it is a psychoanalytic study of the hallucinations of a madwoman.

As a ghost story, then the tale details the classic struggle between good and evil and dealings with the supernatural. If one takes it as a psychoanalytic study, then the story emphasizes sexual repression and the sources of insanity. In either case, The Turn of the Screw has delighted readers for more than a century and continues to serve as one of the many examples of James's literary artistry, among such other notable works as The American, The Ambassadors, and The Portrait of a Lady.

More summaries and resources for teaching or studying The Turn of the Screw.

The Turn of the Screw from Gale. ©2005-2006 Thomson Gale, a part of the Thomson Corporation. All rights reserved.