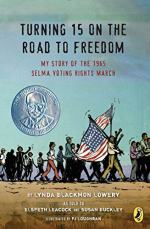 Turning 15 on the Road to Freedom Summary & Study Guide

Lynda Blackmon Lowery
This Study Guide consists of approximately 25 pages of chapter summaries, quotes, character analysis, themes, and more - everything you need to sharpen your knowledge of Turning 15 on the Road to Freedom.

Turning 15 on the Road to Freedom Summary & Study Guide Description

Turning 15 on the Road to Freedom Summary & Study Guide includes comprehensive information and analysis to help you understand the book. This study guide contains the following sections:

This detailed literature summary also contains Topics for Discussion on Turning 15 on the Road to Freedom by Lynda Blackmon Lowery.

The following version of this book was used to create this study guide: Blackmon Lowery, Lynda. Turning 15 on the Road to Freedom: My Story of the 1965 Selma Voting Rights March. New York: Dial Books, 2015.

In this nonfiction memoir written for young readers, Lynda Blackmon Lowery recounts her experience as the youngest member of the historic Selma-Montgomery voting rights march of 1965. The memoir opens with the lyrics to a song titled “Woke Up this Morning” with inspiring words on freedom. This song sets the tone for the book.

Born in 1950 in segregated Selma, Alabama, Lynda grew up in a black close-knit African American community. Her mother died when she was seven because the local hospital was restricted to white people only. Lynda’s father and grandmother raised her and her siblings to be strong, faithful, and determined to end segregation and get the right to vote. After hearing an inspiring speech by Dr. Martin Luther King, Jr., an important leader of the civil rights movement, 13-year-old Lynda joins advocacy efforts. Children and adults work together to plan sit-ins, peaceful demonstrations, and marches. The principle that the civil rights marchers followed was “steady, loving confrontation” (22).

Lynda and her young friends got into a routine of marching, going to jail, and marching again after they were released. As the movement gains momentum, efforts to suppress the black community are increased. Police shoot a man named Jimmie Lee Jackson while he was peacefully protesting. In the meantime, Lynda and several of her young female friends are imprisoned in a small windowless room called the sweatbox, where they pass out from the heat. At Jimmie Lee Jackson’s funeral, Dr. King calls for a great march to be planned on March 7, 1965.

Lynda and the others gather at church to begin their march. They set out singing freedom songs anthems of the civil rights movement inspired by Christian hymns that promote courage and unity. The marchers maintain the principle of peaceful protest but the law enforcement, led by staunch segregationist Sheriff Clarke, respond with violent means, unleashing tear gas on them. Lynda is savagely beaten and requires stitches on her eye and the back of her head. This trauma remains with her and the fear of being hurt again comes back to haunt her at the next great march, which is planned in response: the historic march to the state capital to demonstrate to Governor Wallace that African Americans will not be silenced by violence and demanded voting equality.

The 50-mile march from Selma to Montgomery was a momentous triumph. Starting on March 21, the marchers rally together at Brown Chapel, the hub of the community, and leave singing “We Shall Overcome,” an inspiring freedom song (71). This time, soldiers protect the marchers with their rifles, the press is present to broadcast their progression to the world, and both white and black people join them from across the country. They set up camp each night and continue onwards each morning. By the time they reach Montgomery, about 10,000 people have gathered. Famous singers and actors come in from Hollywood and New York to perform and leaders like Dr. King speak to the crowd at the capitol. Lynda reflects on how things were different when they return home after that momentous march. On August 6, 1965, the United States Congress pass the Voting Rights Act, giving African Americans the right to vote.

Lynda’s memoir concludes with the lyrics to “Ain’t Gonna Let Nobody Turn Me ‘Round,” another freedom song sang on the Selma-Montgomery march, and several appendices, including a historical note about voting rights, and four short biographical sketches of people who died or disappeared because of their activism follow. Lynda encourages her young readers to believe in their own ability to change history by using their voice in a peaceful and loving way. She calls the Selma Movement a “kid’s movement,” and declares that “You have a voice too, and with determination, you can be a history maker just like me” (103).

More summaries and resources for teaching or studying Turning 15 on the Road to Freedom.

Turning 15 on the Road to Freedom from BookRags. (c)2022 BookRags, Inc. All rights reserved.