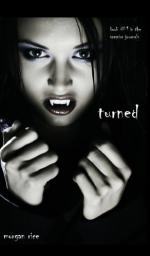 Morgan Rice
This Study Guide consists of approximately 23 pages of chapter summaries, quotes, character analysis, themes, and more - everything you need to sharpen your knowledge of Turned (Book #1 in the Vampire Journals).

This detailed literature summary also contains Quotes and a Free Quiz on Turned (Book #1 in the Vampire Journals) by Morgan Rice.

“Turned” is a young adult novel by Morgan Rice, and the first in her Vampire Journal series. It details the discovery of 18-year-old Caitlin Paine that she is a vampire and her encounters with the vampire underworld of New York. When the novel begins, Caitlin and her brother, Sam, have moved to New York with their mother, who is emotionally and verbally abusive. Caitlin befriends and quickly develops romantic feelings for Jonah, and surprises herself by beating up the bullies who beat up Jonah. Caitlin begins to feel increasingly hungry, and dreams about drinking blood. While on a date with Jonah, Caitlin feeds on an international superstar vocalist. Because of this, she becomes wanted by the police, and captured by the Blacktide Coven of vampires. She is rescued by Caleb, of the White Coven, who believes she is the chosen One who will lead them to a mysterious sword that will save both vampires and mankind from an apocalyptic war. Caleb even goes so far as to turn his back on his own coven, risking banishment, to protect Caitlin. When the novel ends, Caitlin and Caleb know they have a long journey ahead of them.

More summaries and resources for teaching or studying Turned (Book #1 in the Vampire Journals).