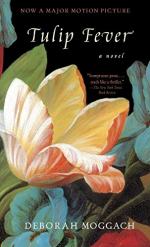 The following version of the novel was used to create this study guide: Moggach, Deborah, Tulip Fever, The Dial Press, December 18, 2007. Kindle Edition.

The sins of lust, greed, and vanity combine with a destructive force in the novel Tulip Fever by Deborah Moggach. Three lives are changed forever when Sophia begins an affair with an attractive, young painter despite her better judgement. Themes in the novel include deception and disguise, the emptiness of beauty and vanity, master-servant relationships, and the role of art in the world.

Sophia’s troubles begin when her husband, Cornelis, suggests they have their portrait painted. Sophia and Jan van Loos, the painter, are attracted to each other almost immediately. Sophia fights her attraction. Having been raised as a Catholic, she knows her lust is wrong. However, she is unable to stop herself. Once her affair with Jan begins, Sophia digs herself in deeper and deeper in lies and deception to keep her secret hidden.

To complicate matters, Maria, who is Sohia’s maid, gets pregnant out of wedlock and threatens to tell Sophia’s secret if Sophia fires her. Sophia and Maria come up with a complicated plan to hide Maria’s pregnancy and pretend it is Sophia who is the one pregnant. Once the baby is born, Sophia will claim Maria’s baby as her own. Adding a twist to the story, Sophia and her lover decide to run away together, using Sophia’s faked death in childbirth as their cover.

In order to cover the expenses they have incurred in hiring a doctor willing to lie and cover up their deception, as well as money they will need to set up a new lives for them selves, Jan and Sophia get involved in the tulip trade. At the time in Amsterdam, tulip bulbs were trading for astronomical amounts of money. Jan begins dabbling in the market. At the beginning of his small tulip business, he is successful. Feeling as if they are indestructible, Jan and Sophia decide to cash in all of their assets and borrow money to purchase a Semper Augustus bulb, the most valuable of the tulip bulbs. Circumstances cause Jan to send his simpleminded servant, Gerrit, to pick up the bulb. Gerrit botches the job and returns to Jan empty handed. Not only do Jan and Sophia not have they money they need to pay off their creditors, they do not have the money they need to leave the country.

Meanwhile, Maria’s lover, Willem has returned from the Navy. He goes to Maria hoping to reconcile with her. Maria and Willem argue as Maria tries to make Willem understand that she cannot leave the baby because it is theirs. The baby cries in hunger, and Maria nurses it without thinking about Cornelis. He walks in on the scene and realizes the baby is not his at all but Maria and Willem’s. He has been duped. Maria tells him the entire story of Sophia’s plan to pass Maria’s baby off as her own and fake her death in childbirth.

Cornelis learns the two had planned to sail away on a ship to the East Indies. He purchases passage on the same ship with plans to kill Jan and reclaim Sophia. He imagines them living the remainder of the their lives in Batavia. Before leaving, Cornelis signs over his house to Maria and Willem. He is never heard from again.

When Jan tells Sophia the bad news of their financial ruin, Sophia fakes her death again, pretending to drown in the canal. Jan dedicates his life to painting portraits that pay homage to Sophia and the story of their love. Years later, Jan believes that he sees Sophia among a group of nuns who live at the Catholic convent.