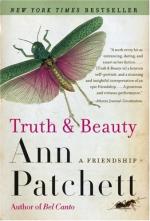 This detailed literature summary also contains Topics for Discussion and a Free Quiz on Truth & Beauty: A Friendship by Ann Patchett.

Truth & Beauty by Ann Patchett was about the lifelong friendship between two famous writers, Ann Patchett and Lucy Grealy. Lucy struggled with a disfigured face. They both struggled for years to become famous writers, but remained best friends through all the ups and downs of their lives and relationship until Lucy's death.

Ann Patchett went to the prestigious Iowa Writers' Workshop in 1985. She found an apartment on Governor Street, which was both modest and cheap. Her roommate was Lucy Grealy, a fellow writer from Ann's Alma mater, Sarah Lawrence College. At SLC, Lucy had a rock star reputation for her great writing and her disfigured face. Lucy had childhood cancer and due to chemotherapy, she lost part of her jaw and only had her six front teeth.

Ann and Lucy built the foundation of their lifelong friendship on Governor Street. They partied, danced, and drank until all hours. They exchanged writing ideas. Lucy asked Ann if she was beautiful and if anyone would ever love her. Ann took the nurturing role and told Lucy she would be fine. At Iowa Writers' Workshop, Lucy was just as famous as she was at Sarah Lawrence. Ann was the organized, quiet friend who worked hard at her writing. Lucy loved being around people and being the center of attention. She was a natural talent, who could hand in a perfect piece of writing last minute.

After they left Iowa, Ann and Lucy constantly wrote letters to each other. In this book, there were excerpts of Lucy's letters only. Ann worked as a waitress at TGIFriday's in Nashville. Lucy went to Aberdeen, Scotland to have more reconstructive surgeries. They both hated their lives. They submitted their writing to magazines and applied to fellowships, but nothing came through. Lucy's surgery was unsuccessful, as were all of them. Ann won a fellowship in Provincetown, Massachusetts. She flourished in her writing there. Lucy won two fellowships as well. They both became published writers.

Lucy became a literary star with her powerful memoir, Autobiography of a Face. She was a rock star on the literary scene in NYC. Ann's book could not compare. They shared in each other's successes. Lucy decided to have one last miracle surgery, her 39th surgery. It did not work. Lucy spiraled downward into a depression of self-loathing and heroin addiction.

Meanwhile, Ann had great success with her fourth book. She became a rising star, but she still took care of Lucy. She would fly from Nashville to NYC to nurse her after surgery. She tried to talk her out of using heroin. Nothing worked. Lucy became more distant. Ann could not handle her and almost decided to leave the friendship altogether.

Lucy died of an accidental heroin overdose. Ann realized then her dear friend Lucy was not invincible. She was just like everyone else.