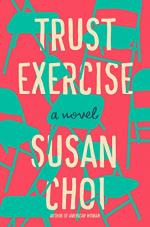 Susan Choi
This Study Guide consists of approximately 36 pages of chapter summaries, quotes, character analysis, themes, and more - everything you need to sharpen your knowledge of Trust Exercise.

The following version of this book was used to create this study guide: Choi, Susan. Trust Exercise. New York: Henry Holt and Company, 2019.

The novel opens in 1982. Sarah is a freshman at the Citywide Academy for the Performing Arts, which is a selective, arts-focused high school. Sarah begins dating David, a fellow freshman. David ends the relationship at the beginning of their sophomore year, and Sarah is heartbroken. Sarah and David’s theater teacher, Mr. Kingsley, begins using personal information about the students in order to facilitate dramatic confrontations between them via performance exercises. Kingsley facilitates a confrontation between Sarah and her former friend Joelle, and he then consistently pairs Sarah and David together for performance exercises. This causes much discomfort for Sarah and David.

When a group of visiting students arrives at CAPA from England, Sarah quickly forms a rapport with an English student named Liam. They begin dating, although Sarah still pines for David, and she does not find her relationship with Liam very fulfilling. One night after a party with other students, Sarah finds herself with no way to get home. She contacts Elli—the mother of a classmate of Sarah’s named Karen—and Elli sends a cab to bring Sarah to Elli’s house. Elli tries to comfort Sarah, but Sarah finds Elli’s attempts uncomfortable and intrusive.

The narrative then shifts ahead to the year 1997. Karen is now the narrator. It soon becomes apparent to the reader that the first half of the book is actually the first half of a novel written by Sarah, the contents of which are heavily based on Sarah’s experiences at CAPA. Karen and David still live in their hometown. David has founded a theater company, and Karen sometimes helps him with administrative tasks. Karen is training to be a clinical therapist.

One day, David mentions to Karen that Martin—a drama teacher from England who accompanied the aforementioned visiting students at CAPA—recently contacted David. Martin was recently fired from his job as a teacher amid allegations of having sexual relationships with students. Karen knows that the allegations against Martin are likely true, for when Martin was at CAPA, he manipulated Karen into having a sexual relationship with him. He then returned to England and cut off all contact with her. Karen then discovered that she was pregnant with his child. She gave birth to the child and gave it to adoptive parents.

David tells Karen that he will be directing a production of a new play written by Martin. Karen reads the play and decides to audition for it. David casts her as the female lead, and Martin is cast as the male lead. Karen then goes to Los Angeles to confront Sarah about appropriating real people and events in Sarah’s novel. However, Karen and Sarah end up having a pleasant chat over dinner, and Sarah decides to see the play in which Karen, martin, and David are involved. During the opening performance of the play, Karen shoots Martin in the genitals in order to attain vengeance for Martin’s misdeeds.

The novel’s final section takes place a few years later. Karen’s biological daughter, Claire, is now 20 years old. Claire visits CAPA to meet with the headmaster, as Claire hopes that the school will have records that will help her track down her biological mother. However, the headmaster refuses to help Claire or give her any records. He then forcibly kisses her, and Claire flees. The narration states that, years later, there was a female former student made a credible allegation that Lord had engaged in sexual misconduct.

More summaries and resources for teaching or studying Trust Exercise.