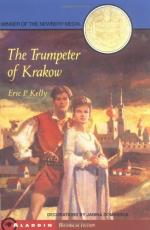 The Trumpeter of Krakow Topics for Discussion

Eric P. Kelly
This Study Guide consists of approximately 56 pages of chapter summaries, quotes, character analysis, themes, and more - everything you need to sharpen your knowledge of The Trumpeter of Krakow.

1. What are the major encounters and events that influence Pan Kreutz's development, and what is the effect of each on his state of mind?

2. Compare Jan Kanty and Pan Kreutz (especially when Pan Kreutz is under Tring's influence). Does either man's philosophy prevail today?

3. Near the end of chapter 2 Joseph's mother says, "We will wait, for God is in the waiting." What does she mean by this?

4. Chapter 3 mentions that the book is set at a time "when children grew to be men and women often over a single night." What are the advantages and disadvantages of a world in which people are considered adults by the time they are fourteen or fifteen?

5. Are women given too small a role or is their limited importance justified by the times? Could you imagine a woman as a hero in this world? Describe such a character...

More summaries and resources for teaching or studying The Trumpeter of Krakow.

The Trumpeter of Krakow from BookRags. (c)2023 BookRags, Inc. All rights reserved.