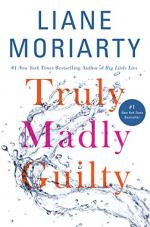 Liane Moriarty
This Study Guide consists of approximately 49 pages of chapter summaries, quotes, character analysis, themes, and more - everything you need to sharpen your knowledge of Truly Madly Guilty.

Truly Madly Guilty is a contemporary, Australian novel by Liane Moriarty about marriage, parenthood, and lifelong friendships. Clementine and Erika, who have been friends since childhood, are dealing with a near-tragedy that has far-reaching repercussions. The plot weaves back and forth through time, as memories often invade the present. Chapters suddenly launch themselves forward or backward in time. Readers are immediately treated to what appears to be a cooling friendship between Clementine and Erika, stemming from a barbeque.

For the first half of the novel, the barbeque is touted as the singular event which has changed everything. However, the details of what happened at the barbeque are not revealed until well into the novel. Erika and her husband, Oliver, want to have a baby, but Erika is unable to conceive. They are asking Clementine and her husband, Sam, to donate eggs to Erika. However, what they hoped would be a discussion about the subject is made brief and sudden as Erika’s next-door neighbors, Vid, his wife Tiffany, and their daughter, Dakota, invite everyone over for a barbeque. As such, Erika, Oliver, Sam, Clementine, and Holly and Ruby (Sam's and Clementine's children), go next door. Harry, an angry, old neighbor, watches the get together from his window.

As the day wears on, the alcohol flows and only Oliver is not tipsy. As the evening approaches, Tiffany’s past as a stripper comes out, and most of the adults begin to behave like teenagers. No one is watching the three children. Erika screams when Ruby disappears in Vid’s fountain. Erika and Oliver are the first to reach Ruby, saving her life by administering CPR. Everyone comes to regret the barbeque, wishing it had never happened in the first place. Clementine and Sam blame each other for the accident. Erika, whose medication as mixed with alcohol, struggles for most of the entire novel to remember exactly what happened while discussing with Oliver alternative ways of beginning a family. Vid and Tiffany feel horrible over what happened, so much so that Vid destroys the fountain.

As the novel continues on, it is revealed that Erika’s mother is a hoarder. The friendship between Erika and Clementine was forced by Clementine’s mother, who insisted on giving Erika daughter-status and a better environment. It is also revealed that Clementine and Sam blame each other, because they blame themselves for being irresponsible. They go on to take CPR classes so that they can be ready should such an incident ever again occur. Erika’s memory finally returns. Preparing to bring plates out to the backyard, she saw Harry banging on the window of his house to gesture toward Ruby, alerting Erika to Ruby falling in. (It is later revealed the elderly Harry died falling down the stairs seconds later in the attempt to rush out and save Ruby.) Holly later confesses to having pushed Ruby into the fountain in the first place, for taking her rock collection. As the novel ends, Oliver and Erika are set to become foster parents, and Erika writes Clementine a warm note and includes a photograph of them as teenagers on a roller coaster from many years before.