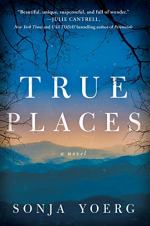 Sonja Yoerg
This Study Guide consists of approximately 44 pages of chapter summaries, quotes, character analysis, themes, and more - everything you need to sharpen your knowledge of True Places.

The following version of this book was used to create the guide: Yoerg, Sonja. True Places. Lake Union Publishing, 2019.

Yoerg’s novel is divided into 47 short chapters with third person omniscient narration. The narrator follows the different characters throughout the novel, offering the reader different perspectives.

The narrator first focuses on Iris while she looks for her mother in the woods. She leaves the cabin they live in and finds that she has fallen down a hole and is unable to get out. Iris spends the night next to the hole, waiting for her mother to die. She leaves in the morning with Ash, her younger brother who has accompanied her.

Three years later Iris is found lying on the road by Suzanne Blakemore, who was driving along the parkway in order to escape the responsibilities that were crushing her. She takes Iris to the hospital and tells the police what she knows. She later finds out that Iris is 16 and older than she appears due to her small stature and emaciation. Iris tells the police that her mother had died and that her father had disappeared, and that she believed he must be dead. She fails to tell them about Ash, wanting to protect him.

The police are unable to find any relatives and Iris goes to live with Suzanne and her family. She has difficulty adjusting to modern life having spent her entire existence in the woods. Iris’ presence causes problems between Suzanne’s family members. Her husband, Whit, believes Iris is too much of a burden on his wife and is resentful that the house is not as orderly as it used to be. Suzanne’s 15 year old daughter, Brynn, also resents Iris for stealing her mother’s attention and behaving in a socially unacceptable way. Suzanne’s 17 year old son, Reid, is less concerned about Iris’ presence and is curious about her non-materialistic life.

Suzanne and her family go to Suzanne’s parent’s house for dinner. Brynn takes Iris with her while trying on the expensive prom dress her grandmother had bought her and dresses her up in a fur coat with unflattering makeup. She presents her to the family as “The Beast”. Suzanne is enraged by Brynn’s behavior and expresses her anger while the rest of the family do not see the problem.

On prom night, Brynn encourages Iris to come to the after party. Iris goes, believing one of Brynn’s friends, Sam, might like her. Brynn takes humiliating photos of her and Iris realizes Brynn had invited her to make fun of her. Reid also comes to the party and sees Brynn kissing a guy she had met on Tinder. He had met this guy, Robby, before when he had shown him a semi-naked photo of Brynn. Reid had told his father, but Whit had done nothing due to the fact Robby’s father was an important business partner.

Suzanne finds out about the photo and Brynn’s relation to college-aged Robby after she gets brought home on prom night by a police officer. She had been found on the lawn at the party, intoxicated. Suzanne finds out that Iris had been there too by going through Brynn’s phone. She calls Iris, begging her to come home after Iris does not return due to Brynn’s prank. Suzanne decides to leave with Iris after finding out about Whit’s knowledge of the photo and his failure to address it.

Suzanne takes Iris out of town in an attempt to find her cabin. They narrow down where she must have lived through Iris’ memories of landmarks. While looking for the cabin, they come across a sign with Ash’s name on it along with his birth and death date. Iris flees from Suzanne realizing for the first time that her brother is dead. They reunite at the cabin and Suzanne shows her that Iris’ father had left a letter saying he was looking for her.

Suzanne and Iris return to Suzanne’s family and Suzanne tells them about an idea she has of opening a clinic dedicated to the study of the medicinal use of herbs. Whit worries about Suzanne’s new purpose but she affirms that she can not go back to her previous life. The police find Iris’ father, James. He had been arrested after getting in a bar fight after Ash’s death and had not been able to return to the cabin due to serving his sentence. Iris meets him in a drug rehabilitation facility where he is recovering from drug abuse.

Suzanne opens her institute for medicinal plants, naming it after Iris’ mother. Her relationship with her family has improved since finding her purpose. Iris spends some of her time at the institute and some in her cabin nearby. She decides she does not want to hide in the woods like her mother had and thinks about the possibilities in her future.

More summaries and resources for teaching or studying True Places.