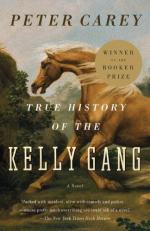 Peter Carey
This Study Guide consists of approximately 80 pages of chapter summaries, quotes, character analysis, themes, and more - everything you need to sharpen your knowledge of True History of the Kelly Gang.

Drewe's novel about Ned Kelly is considered the first on the subject of this legendary Australian. His account of Kelly's life was adapted into the 2003 movie Ned Kelly.

First published in 1986, The Fatal Shore tells the story of Australia's founding and history as a penal colony for English and Irish convicts.

Flannery, Tim F., The Explorers: Stories of Discovery and Adventure from the Australian Frontier, Grove Press, 2000.

The Explorers is a collection of first-person accounts about the discovery and exploration of Australia, from early accounts in the 1600s to recent stories of adventures still to be had in the continent's outback.