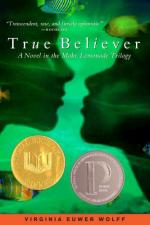 Virginia Euwer Wolff
This Study Guide consists of approximately 34 pages of chapter summaries, quotes, character analysis, themes, and more - everything you need to sharpen your knowledge of True Believer.

True Believer is the story of fifteen-year-old Verna LaVaughn's coming-of-age and deales with themes of love and loyalty, in a poverty-stricken and crime-riddled neighborhood.

Picking up where Wolff's Make Lemonade left off, Verna LaVaughn is fifteen years old and lives in a dangerous, run-down and poor neighborhood. Although many kids around her succumb to life on the streets, Verna LaVaughn, who just goes by LaVaughn, is saving money to go to college one day. LaVaughn's father was shot and killed when she was just a little girl and since then, it's just been LaVaughn and her mother working for their future. LaVaughn's mom works hard, saving money from each paycheck to ensure that LaVaughn is given the opportunity to go to college. LaVaughn, too, works hard for her future, finding a job washing laundry at the local children's hospital. LaVaughn also enrolls in advanced science classes and a grammar club so she can catch up with the kids at "rich schools" who didn't get a poor education like everyone in LaVaughn's neighborhood did.

Although LaVaughn is focused on her future, a plethora of problems threaten to distract LaVaughn from her duties. First, LaVaughn's childhood best friend, a boy named Jody, returns to the projects where they grew up, looking more gorgeous than LaVaughn knew a boy could be. When the two friends reunite, LaVaughn is struck silent with awe. Jody calls her "Buddy," brings homework to her from school when she's sick, and invites LaVaughn to swim at the local pool with him. LaVaughn is sure Jody must be in love with her, hopefully as much as she's in love with him. But sometimes Jody's behavior is confusing: he acts interested in LaVaughn's life one day, but is distant the next. After their first kiss, Jody chuckles under his breath, traumatizing LaVaughn. Confused and insecure, LaVaughn spends her days hiding from the boy she loves rather than confronting him about his strange behavior. The conflict in their relationship comes to a boiling point when LaVaughn walks in on Jody in a romantic embrace with another teenager. However, this time it's a boy. Shocked by Jody's homosexuality, LaVaughn sinks into a crippling depression.

Meanwhile, LaVaughn's other best friends - Myrtle and Annie - are increasingly distant as the religious group they've joined to keep them out of trouble with boys, morphs into a cult separating the girls from all unbelievers, including LaVaughn. Abandoned by Jody, separated from Myrtle and Annie, the only person LaVaughn has left to rely on his her mother, until she starts dating a new man, the first new man since LaVaughn's father died. Suddenly, LaVaughn's mother doesn't have much time for her anymore, and when she does, Lester is always right by her side. To top everything off, the fellow students in LaVaughn's study group accuse her of thinking she's better than everyone, calling her self-centered and snobby. Slowly but surely, LaVaughn learns how to stand on her own two feet, without the support of her mother, her friends, or a boyfriend. She learns to value her own future and to work hard for what she wants to achieve. It is a humbling and gratifying realization. Once LaVaughn learns the value of self-respect, it emanates out to everyone around her and the broken relationships begin to repair.

More summaries and resources for teaching or studying True Believer.