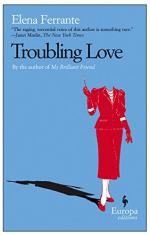 Elena Ferrante
This Study Guide consists of approximately 62 pages of chapter summaries, quotes, character analysis, themes, and more - everything you need to sharpen your knowledge of Troubling Love.

The following version of this book was used to create this study guide: Ferrante, Elena. Troubling Love. Translated by Ann Goldstein, Europa Editions, 2016.

Amalia, the mother of Troubling Love’s first-person narrator Delia, drowned herself in the sea. Amalia’s recovered body wore only a fancy bra from the Vossi sister’s lingerie shop and her wedding rings. Amalia was supposed to visit Delia in Rome on the night she died, but instead contacted Delia through a series of ambiguous phone calls. Delia returned to Naples, her hometown and the city where Amalia resided, for her mother’s funeral. During the funeral, Delia felt relieved at no longer having to worry about Amalia and got her menstrual period. She was quickly reunited with her two sisters at the funeral who left the city of their childhood right afterward.

After the funeral, Delia went to Amalia’s old apartment to pack up her mother’s belongings. She encountered the elevator in Amalia’s building, which she always liked because she had established a secret place for herself there. Inside Amalia’s apartment, Delia found a garbage bag filled with Amalia’s old underwear in the bathroom. Delia had a vision of the apartment hallway turning into the bathroom. Delia pictured herself shaving Amalia. Then, Delia returned to the bathroom and changed into a pair of Amalia’s underwear, leaving her own underwear, which was blood-soaked from her period, on the bathroom floor.

Delia could not sleep that night because she kept dreaming of Amalia. The phone in Amalia’s apartment rang and Delia picked to up to discover that Caserta, a man Delia remembered from her childhood, was calling for Amalia. Delia followed the instructions Caserta gave her over the phone. She brought the garbage bag filled with Amalia’s underwear to the abandoned sixth floor and waited for Caserta to arrive. After waiting for hours, Delia returned to Amalia’s apartment and found Amalia’s suitcase and purse left on the floor. Delia saw Caserta leaving in the elevator, holding the garbage bag with Amalia’s underwear.

Delia learned from Signora De Riso that Amalia had been seeing a man before she died, who Delia gathered was Caserta. She went through Amalia’s suitcase, which was filled with all new clothes and cosmetics. In the purse, Delia found a pair of panties that matched the Vossi bra Amalia had worn when she drowned, along with money, an identification card, and an old photograph of the family including Delia’s estranged, abusive father. Delia put on some of Amalia’s makeup. She noticed that Caserta had taken her own pair of underwear from the bathroom floor in addition to Amalia’s.

The following morning, Delia visited her Uncle Filippo at his house. They discussed both Amalia and Caserta. Then, Delia took the bus to the Vossi sister’s shop. She tried on the clothes from Amalia’s suitcase, which fit her perfectly, and met a floorwalker who worked there named Antonio Polledro. She showed the man Amalia’s identification card, to see if he remembered her coming into the shop, but soon discovered that Delia’s own picture was on the document.

Delia left the shop and went to a nearby bar with Uncle Filippo. They discussed Amalia and Delia realized she must have fallen asleep because her uncle and the rain woke her up. She lost track of Uncle Filippo and spotted Caserta in a department store. She followed Caserta to a funicular station, where she witnessed him getting into a confrontation with Antonio Polledro. Delia followed Caserta onto a funicular car, with Polledro and Uncle Filippo close behind. On the funicular, she witnessed Caserta sexually harass a young woman. Then, Delia exited the funicular and Polledro found her. He told her that he was Caserta’s son and Delia’s childhood friend. Delia and Polledro left the station together in a taxi. As Polledro spoke to her, Delia thought about Caserta’s father’s old sweet shop where she used to spend time with her friend when they were children. The taxi arrived at a hotel and Polledro had a business meeting but sent Delia up to a room to wait for him.

In room 208, Delia showered and tried on the robe she found in Amalia’s suitcase. Inside the pocket of the robe, she found a birthday card addressed from Amalia to Delia, which led Delia to believe that all of the clothes in the suitcase were meant to be her birthday gifts. She also noticed sand in the pockets of the robe, which made her think that Amalia had worn the robe to the beach when she drowned herself. Then, Polledro entered the room and began kissing her. Delia was not comfortable during Polledro’s attempts to seduce her. She masturbated him then left.

Delia returned to Amalia’s apartment and invited Signora De Riso inside. She accused the widow of telling Delia’s violent father about Amalia’s affair. After phone calls with Caserta and Uncle Filippo, Delia felt anxious and left the apartment. She went to her childhood home, where her father lived. Delia spoke with her father about Amalia. Then, Delia’s father attacked Delia verbally and physically. She left and went to Caserta’s father’s old sweet shop, which was now closed. Inside, she saw a cot with the garbage bag of Amalia’s underwear on top as well as Caserta’s clothes hanging on ropes across the room. Inside Caserta’s jacket pocket, she found evidence of Amalia and Caserta going out on a date the night that Amalia was supposed to be on a train to visit Delia in Rome. She also found sand in the jacket pocket which made her assume that Caserta was with Amalia at the beach when Amalia drowned.

Delia descended the stairs into the sweet shop’s cellar. She recalled the memory of Caserta’s father molesting her when she was young. She had told her father that Caserta and Amalia had been together in the cellar instead, which drove him to threaten Caserta out of town. Delia swore off Caserta from her life.

In the final scene of the novel, Delia returned to the house where her family used to go on vacation. She remembered instances of her father controlling her mother. Then she took out her identification card and drew Amalia’s hair over her own features.

More summaries and resources for teaching or studying Troubling Love.