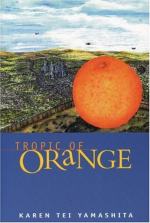 Related Topics
Through the Arc of the Rainforest

Karen Tei Yamashita
This Study Guide consists of approximately 40 pages of chapter summaries, quotes, character analysis, themes, and more - everything you need to sharpen your knowledge of Tropic of Orange.

Tropic of Orange: A Novel Summary & Study Guide includes comprehensive information and analysis to help you understand the book. This study guide contains the following sections:

This detailed literature summary also contains Topics for Discussion and a Free Quiz on Tropic of Orange: A Novel by Karen Tei Yamashita.

The novel Tropic of Orange tells the story of a magical event that begins in Mexico on the Tropic of Cancer and spreads north to Los Angeles. The story is told from the perspectives of seven principal characters. The story begins on the longest day of the year near Mazatlan, Mexico.

Rafaela Cortez tends the house of a journalist named Gabriel Balboa. Gabriel works for a major Los Angeles daily newspaper and he has purchased a property on the Tropic of Cancer. Over the years, he has built a house and made improvements to the property, but it always seems to be an unfinished work. Rafaela needs a break from her marriage so she goes from Los Angeles to Gabriel's home to act as a sort of supervisor to the work being done on the property. Of the many trees Gabriel has planted, one is an orange tree planted directly on the Tropic of Cancer. The tree is believed to be a descendant of the first orange trees brought from Brazil to the Los Angeles area in the late nineteenth century. This tree produces a single orange and it seems to somehow capture the Tropic line.

In addition to Gabriel, the principle characters in Los Angeles include Bobby Ngu, the husband of Rafaela, Emi, a television producer, Buzzworm, a street activist and social worker, and Manzanar Murakami, a homeless person who believes he conducts the sounds of traffic from a freeway overpass. The seventh principal character is an old man named Arcangel who travels from Mexico to the United States. As the novel unfolds, these characters become more and more interconnected.

In addition to the disruption to the world from the movement of the Tropic of Cancer, other plots develop that affect both principle and minor characters. First an outbreak of tainted oranges kills people in Los Angeles. The oranges are believed to be infused with cocaine as a means to smuggle the drug into the United States. In a sinister turn of events, some of the principle characters uncover a black market operation dealing in the internal organs of children.

Two separate but nearby accidents on a major Los Angeles freeway trap a mile long section of motorists. The motorists leave their vehicles, and thousands of homeless people who have lost their camps to the fire resulting from the freeway accidents occupy the abandoned cars. Most of the principle characters in Los Angeles join the homeless on the freeway and contribute to the television news broadcasts covering the event.

As Arcangel and the orange attached to the Tropic of Cancer continue to move north toward Los Angeles, events become more surreal, and all characters brace for what will be a violent climax involving all of the principle characters in different ways.

More summaries and resources for teaching or studying Tropic of Orange: A Novel.

Tropic of Orange: A Novel from BookRags. (c)2022 BookRags, Inc. All rights reserved.