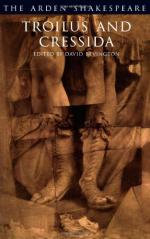 Introduction & Overview of Troilus and Cressida

William Shakespeare
This Study Guide consists of approximately 25 pages of chapter summaries, quotes, character analysis, themes, and more - everything you need to sharpen your knowledge of Troilus and Cressida.

Elizabethan audiences would probably have been intimately familiar with the details and nuances of the Trojan War from both medieval and classical accounts. The Elizabethan age glamorized and romanticized the myths and accounts of antiquity. Shakespeare's Troilus and Cressida disappoints that romanticism by presenting a picture of the Trojan War, in which all its participants fall short of their mythological proportions and become all too human and frail. But Shakespeare's intention, perhaps, is not to present a pessimistic world both inside and outside the walls of Ilium in order to induce a similar pessimism and cynicism in his contemporary audiences; rather, he reduces the mythological figures of the antique world to human proportions in order to debunk the notion that the antique world embodied a nobility and virtue against which the Elizabethan world could not compare. It is worth noting that the practice of idealizing the past is not limited to the Elizabethan's idealization of antiquity. Many societies look back on past times and wistfully recall values that the present time may lack.

Many of the characters in Shakespeare's Troilus and Cressida border on the despicable, and none of the characters are consistently noble and virtuous. Thersites is a character so vicious, unsavory, and ungovernable that the Greeks, in not only tolerating his presence but finding him amusing, condemn their own virtue. Pandarus, by his own admission, is a bawd pure and simple. Helen, renowned throughout the ages for her beauty and command of men, is pictured as a trifling and superficial woman. At the beginning of the play, it is related that she has found great amusement in flirting with the young Troilus as she counts the hairs in his fledgling beard. Later, we see her at play, singing and dancing while the brutalities she has instigated are safely distanced from her by the walls of Troy. Paris is as his father, Priam, accurately describes him when he says to him,

You have the honey still, but these the gall;

So to be valiant is no praise at all.

Shakespeare's Cressida is no better than Helen; she is, most critics agree, a coquettish whore. Achilles, the great and powerful Greek warrior, is so selfindulgent and proud that he will not leave his tent to fight and maintain the reputation that has evoked the praise to which he has been accustomed. And his furtive and cowardly killing of Hector hardly allows us to understand why he has been so highly praised throughout the play. Even Hector, the Trojan pillar, is not consistent. He withdraws his objection that Helen is not worth the lives her defense has exacted when Troilus appeals to Hector's pride and alludes to the opportunity the war has provided for glorious deeds in battle. In the final battle, Hector follows and kills a Greek soldier who is trying to run away so that he might have that soldier's attractive armor.

Shakespeare systematically denies audiences any opportunity to continue in their idealizations of the antique world. The Trojan War, fought over the idealization of Helen's worth, becomes a metaphor for the danger of disguising the "real" with the "ideal," illustrated at two moments in Shakespeare's play. Near the beginning, Ulysses offers that the Greek army has failed because the hierarchy of authority is no longer recognized, and he justifies that hierarchy in the Great Chain of Being, a conception of the universe often advanced as the conservative norm in Elizabethan England. But in building Ajax up as an ideal figure, Ulysses only succeeds in creating a substitute for Achilles who, in leading by example, is a distraction from and subversion to divinely sanctioned authority. Near the end of the play, Troilus strikes Pandarus and exclaims, "Hence, broker, lackey! Ignominy, shame / Pursue thy life, and live aye with thy name!" (V.x.33-34) But Pandarus gets the last words in the play and wonders aloud why he is so mistreated for that which he was asked to do. He has given Troilus just what the young Trojan wanted. If Troilus has idealized the relationship had with Cressida and suffers as a consequence, that is his fault, not Pandarus's.

When Troilus finds out that Hector has died, he becomes stronger and articulates his new resolution to stay the field and do what must be done. When he proclaims that Hector is dead, Aeneas says, "My lord, you do discomfort all the host" (V.x. 10). Troilus explains that it is not his purpose to do so; he wants only to announce his conviction, the discovery, finally, of who he is. Similarly, perhaps Shakespeare's purpose is not to evoke pessimism in his audience, but to suggest that his own age can find its own identity, its own literary and cultural legacy by turning from an idealization of the past just as Troilus does in the absence of his dominant brother. The same concept can be applied in modern times. Often, in today's society, some people argue that life in the present day compares unfavorably to the, past in a number of areas including values, political policies, and art. In the United States, for example, political leaders and time periods long or even recently past are often held up as models that current leaders and times do not measure up to. Yet, what is often forgotten or overlooked is the fact that these people, these past times were plagued with their own vices and problems. Just as in Shakespeare's time, the danger in idealizing the past is that the value of the present is not fully realized.

More summaries and resources for teaching or studying Troilus and Cressida.

Troilus and Cressida from Gale. ©2005-2006 Thomson Gale, a part of the Thomson Corporation. All rights reserved.