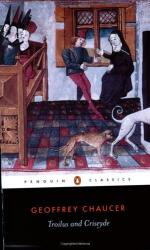 Geoffrey Chaucer
This Study Guide consists of approximately 33 pages of chapter summaries, quotes, character analysis, themes, and more - everything you need to sharpen your knowledge of Troilus and Criseyde.

This detailed literature summary also contains Topics for Discussion and a Free Quiz on Troilus and Criseyde by Geoffrey Chaucer.

A knight of Troy and son of King Priam. As a prince of Troy, Troilus is also a military leader who tries to set an example for the younger knights. Part of his duty, he feels, is to keep them from getting entangled in love affairs and he openly mocks the other young men who cry over their beloved women. This changes when he himself is hit by Cupid's arrow and falls deeply in love with Criseyde, a Trojan widow whom he sees at a feast of Athena.

Troilus is a brave fighter of wide renown, but he becomes weak and helpless with grief over his love for Criseyde. He is helped by his friend Pandarus, who is also Criseyde's uncle, and under his direction schemes to win her heart. In the process, Troilus deceives Criseyde, inadvertently causing her sorrow. He is deeply sorry for his actions, which he blames on Pandarus.

Troilus wins the heart of Criseyde and they carry on a secret affair for three years before circumstances take her away from him. Although she promises to return, she does not. Troilus remains faithful to Criseyde and always keeps his word to never reveal their secret love. He remains valiant in battle and is finally killed by the great Greek warrior Achileus. His soul ascends to Heaven where he finds peace.

A widow of Troy, the daughter of Calkas, and the lover of Troilus. As a widow, Criseyde is afforded a place of honor in Troy, but when her father, Calkas, defects to the enemy Greeks, she is afraid she will be branded a traitor as he was. She approaches Hector, the greatest warrior of Troy and a prince of the city, for protection, which he grants her.

Criseyde seems content to live out her life as a widow and is astonished and reluctant when her uncle Pandarus tells her that Troilus is in deep agony from his love for her. Her uncle plays upon her pity and her vanity to plant the seed of love in her mind and as she learns more about Troilus, this seed grows into her heart. She carries on a secret affair with him for three years.

Criseyde is taken away to the Greek camps in a prisoner exchange arranged by her father. This causes her immense grief, but she finds comfort in the attentions of Diomede, a Greek warrior, who asks to be allowed to devote himself to her. She consents, and gives Diomede a brooch that was once given to her by Troilus. When Troilus sees the brooch on the armor of Diomede, he understands she has betrayed him.

Chaucer does not describe the eventual fate of Criseyde. He does not believe that she truly gives her heart to Diomede, he writes, but he notes that in other versions of the story she does.

The uncle of Criseyde and a close friend of Troilus. Pandarus is a womanizer who nonetheless feels qualified to instruct Troilus on how to win the heart of Criseyde. He is a skillful manipulator of others, playing upon their weaknesses and vanity to get them to do what he wants. He carefully leads Criseyde into regarding Troilus first as a friend and then as a lover and facilitates their secret meetings. He shows a glimmer of conscience about his sometimes deceitful actions, but seems to feel that the ends justify the means, and since his main purpose is honorable, he is right in using his influence to bring the two together.

He is often lighthearted, making jokes and laughing. He seems to have a light view of love himself, encouraging Troilus to simply find another woman after he has lost Criseyde and offering to distract him with feasting and fun while he waits for her to return. He turns serious when he sees how tortured his friend becomes over his love for Criseyde. He eventually grows to hate Criseyde for her betrayal.

Calkasappears in Book I, Book V

A Trojan priest of Apollo and the father of Criseyde. After Calkas receives a prophecy from Apollo that the Greeks will be victorious over Troy, he defects to the Greek side and is considered a traitor. He later convinces the Greeks to ask for Criseyde in exchange for Antenor in an exchange of prisoners, setting into motion the events that lead to Criseyde's betrayal of Troilus.

An outstanding Greek warrior. Diomede begins to court Criseyde as soon as she leaves Troy and is eventually successful in winning her love. His armor is captured in battle and brought back to Troy, where Troilus sees that he had worn a brooch of Criseyde's, confirming her infidelity to Troilus. Troilus vows to kill Diomede and the two meet often in battle, but neither kills the other.

A brother of Troilus. Deiphebus is an unwitting part of Pandarus' plan to bring Troilus and Criseyde together when he agrees to host a dinner party where they will both be present.

Hectorappears in Book I, Book IV

The finest warrior among the Trojans and the brother of Troilus. Hector offers his protection to Criseyde after the death of her husband and the defection of her father to the Greeks. He initially opposes sending Criseyde to the Greeks, but relents to the majority opinion.

A brother of Troilus. Antenor is captured by the Greeks and later exchanged for Criseyde.

A prince of Troy and husband of Helen. Paris steals Helen from the Greeks, starting the war with Troy

The wife of Paris and sister-in-law to Troilus. Helen cares for Troilus while he pretends to be ill.

The King of Troy and the father of Troilus.

A relation of Criseyde who sings a long of love, included by Chaucer in the book.

The goddess of fate and luck. Fortune is portrayed as driving much of the action and causing most of Troilus' woes.

A god of love. Cupid takes offense at Troilus' mocking of love and shoots him with an arrow that causes him to fall in love with Criseyde

The goddess of love. Chaucer invokes Venus in the introductions to the sections of the poem, and Troilus offers a prayer to her once he has won the heart of Criseyde.

Also called Jove or Zeus. The king of the gods.

God of the sun and the patron of the Greeks. Apollo tells Calkas, one of his priests, that Troy is doomed, causing Calkas to leave Troy and join the Greeks.

The Furiesappears in All Books

Supernatural goddesses who punish those who have broken oaths.

Also called Pallas. The patron goddess of Troy. It is at a feast of Athena that Troilus first lays eyes on Criseyde

A Trojan prophetess who tells Troilus the meaning of his dream about Criseyde. Troilus does not believe her interpretation, which turns out to be correct.

The person Pandarus claims is plotting against Criseyde along with Antenor and Aeneas.

The name of the person Pandarus tells Criseyde that Troilus believes she has been unfaithful with.

More summaries and resources for teaching or studying Troilus and Criseyde.