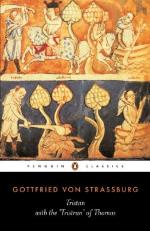 Plot Summary
+Chapters Summary and Analysis
Forward, Introduction and Prologue
Rivalin and Blancheflor
Rual Li Foitenant and The Abduction
The Hunt and The Young Musician
Recognition and Reunion
Tristan's Investiture and Gottfried's Literary Excursus
Return and Revenge
Morold
Tantris
The Wooing Expedition and The Dragon
The Splinter and The Proof
The Love Potion, The Avowal and Bragnane
Gandin, Marjodoc, Plot and Counterplot, and Melot
The Assignation by the Brook, The Ordeal, Petitcreiu, and Banishment
The Cave of Lovers, Discovery, The Parting, and Isolde of the White Hands
Free Quiz
Characters
Objects/Places
Themes
Style
Quotes
Topics for Discussion
Order our Tristan Study Guide

Gottfried von Straßburg
This Study Guide consists of approximately 40 pages of chapter summaries, quotes, character analysis, themes, and more - everything you need to sharpen your knowledge of Tristan.

This detailed literature summary also contains Topics for Discussion and a Free Quiz on Tristan by Gottfried von Straßburg.

Gottfried von Strassburg's "Tristan and Isolde" tells the story of a knight and a queen in the Middle Ages, fated to love each other secretly as a result of a mistakenly administered love-potion. Tristan himself is technically the love-child of a pair of lovers whose embracing of the struggle and yearning that love requires clearly inspires the admiration of Gottfried. Rivalin, Tristan's father, is himself so admired by his steward that he provides Tristan with the very best education in languages, chivalric hunting and sport and music that he could offer, and the education serves Tristan so well that he is able to secure a respected place at court. Eventually it is revealed that Tristan is, in fact, the son of the king's sister, and so King Mark promises to groom him for the throne, should that be his wish.

As Tristan learns that he is the son of Rivalin, and so the rightful lord of Parmenie, he decides to avenge the murder of his father as his first duel. When another man comes into England claiming that Ireland is owed tribute from the English, Tristan's confidence inspires him to volunteer as the country's defender. In that duel, he kills the brother of the Irish queen, and the only one who can cure him of the poisoned wound he sustained, and that is how he first comes into contact with that great lady, Queen Isolde, and the beautiful daughter who bears her name. They heal him, and he comes to admire young Isolde as he is employed as her tutor, so when he returns to England, his talking about her inspires Mark that she should be his queen. Tristan returns to the country to kill its dragon, and thereby secure her for his king.

His returning as England's representative, however, makes it necessary for him to reveal his true identity, but a shard of the sword that killed the queen's brother does it for him. Isolde is furious with him for her uncle's murder, but the accidental moment of their sharing the love potion sets the whole story on a different course. From that moment on, the story revolves around the lovers' need to meet in secret, and maintain that ability while suspicion in the court is constantly growing. King Mark is constantly presented with the possibility by two power-hungry members of court, and the lovers are constantly outsmarting them. The law of probability finally makes perpetual evasion impossible, however, and their long-secret affair is discovered.

The Cave of Lovers becomes their secret haven for the best of their affair, and the lovers live in as full a state of bliss as perfect seclusion in a beautiful place allows. They desire the clearing of their names at court, however, so when the opportunity arises, they feign polite distance and convince the malleable king again of their innocence. Their welcome back at court, while enthusiastic, is not long-lived, however, and the story ends with Tristan's fleeing for his life and coming into the country of another Isolde, with whom he has hope of the first legitimate and permanent love of his life.

More summaries and resources for teaching or studying Tristan.