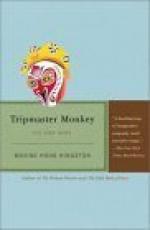 Maxine Hong Kingston
This Study Guide consists of approximately 42 pages of chapter summaries, quotes, character analysis, themes, and more - everything you need to sharpen your knowledge of Tripmaster Monkey.

Tripmaster Monkey, His Fake Book is Maxine Hong Kingston's kaleidoscopic novel of the life of Wittman Ah Sing, a young English major, who graduated Berkley just one year ago. Wittman thinks of himself as a poet and a playwright, although he works as a clerk in a department store. After being fired from his job, Wittman goes to a party in Oakland, meeting a plain, young Chinese woman on the bus. Wittman meets an attractive blonde named, Tasa, at the party, and marries her in the wee hours of the next morning, primarily to avoid the draft.

Wittman takes his "friend" Tasa to meet his mother. It is mah jong day, so all Wittman's Aunties, his mother's close friends and former showgirls, are in attendance. Wittman and Tasa visit his father at an RV campground, and travel to Reno to search for Wittman's missing adopted grandmother. Returning to San Francisco, Wittman puts on a three-day long improvisational play, based largely on Chinese myth, in the Benevolent Association hall. The play concludes with Wittman's monologue, a harangue on the meaning of being Chinese in America. The novel is entwined with multiple layers of literary allusions, Chinese mythology, references to drugs and pop culture, insights about ethnicity, LSD flashbacks, racial slurs, and the history of people of Chinese ancestry who, like Wittman, consider themselves 100% American.

As the novel opens, Wittman calls the prettiest, most unattainable girl from his college years and invites her for cappuccino. Nanci Lee, an aspiring actress from L.A., accepts and he is soon telling her the story of his childhood as the son of two vaudeville entertainers. Wittman lures Nancy to his rented room, but manages to scare her by jumping on the furniture and proclaiming himself the reincarnation of the traditional Chinese hero, the King of the Monkeys.

Wittman goes to work at a department store, where he has recently been demoted from management trainee to part-time clerk in the toy department. Not really understanding the purpose of consumerism, Wittman advises his customers not to buy toy guns, not to use credit cards, and gives merchandise away. Frustrated with his work, he walks off the job, before he can be fired.

At a party given by Wittman's best friend from college, Lance, he encounters many cliques of different types, from heroin addicts who are health-food nuts to potheads who are watching a student film featuring the private lives of playing cards, co-produced by Wittman himself. He meets a beautiful blonde girl named, Tasa, who seems interested in him. He summons the courage to confront Lance about their childhood exploits, and in turn, listens to his friend's adventures. At the end of the party, Wittman regales the few remaining guests with the highly improvisational play he is writing, giving them all roles.

After applying for unemployment and registering with the job service as a playwright looking for work, Wittman gets permission from the Benevolent Association to stage his play at their hall. The play, with a cast of hundreds, goes on for three, consecutive nights. It features traditional Chinese mythological characters in anti-war themes, along with kung fu Buddhist monks and can-can dancers. The final night is a one-man show, a harangue by Wittman on the slights his people have endured, and the meaning of being Chinese American.

More summaries and resources for teaching or studying Tripmaster Monkey: His Fake Book.