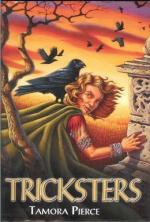 "Trickster's Choice" is a young adult novel by Tamora Pierce and follows the adventures of sixteen year-old protagonist, Aly of Pirate's Swoop.

After a holiday with relatives, Aly returns home to her mother and father. Aly is young and precocious, and aspires to be a spy in the service of her father. But her father wants a better life for her, to see her happily married, and following a safe path in life. He is well aware of the dangers of spying. Aly's mother returns home as well after a long trip, and Aly decides to give her parents some alone time. She decides to sail to visit a friendly lord. But she is accosted by pirates, and sold into slavery.

Aly is purchased by the Balitang family, which us under suspicion of disloyalty by the aged and infirmed king. The Balitang family is exiled to their island estate and castle until their loyalty can be determined. Aly's ability to read people (her gift of sight), and her ability to commune with the gods -especially Kyprioth, the trickster god- earns her a special and trusted place with the family. Aly makes a wager with Kyprioth, that if she protects the four daughters of the Duke of the family, that she will be returned home at the end of the summer. If she fails, she will be pressed into service for a year as a servant to Kyprioth.

Through the spring and the summer, Aly does everything she can to protect the girls and their family, from rallying the local population to reading the faces of visitors to the castle. She befriends the crow-person Nawat, and the two develop romantic feelings for one another. At the same time, Aly's father is journeying to find her. In an epic battle against the traitorous Prince Bronau, Aly upholds her end of the wager. She is free, but refuses to return home with her father, intending to stay with the family, because a revolutionary war is pending.