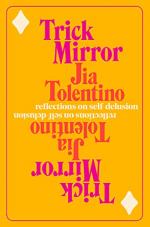 Jia Tolentino
This Study Guide consists of approximately 48 pages of chapter summaries, quotes, character analysis, themes, and more - everything you need to sharpen your knowledge of Trick Mirror.

The following version of the book was used to create the guide: Tolentino, Jia. Trick Mirror. Random House, 2019.

Trick Mirror is divided into nine chapters that explore separate and independent themes. The chapters are not told from a chronological order, but rather introduce individual social commentaries on topics such as sexism, racism and classism from Jia Tolentino’s first-person perspective.

Chapter one examines the social media revolution, and how individual selfhood has been amplified with a commercialized importance. Tolentino suggests that social media platforms have encouraged users to take a performative approach to the internet, in which the audience is imagined to closely follow a user’s every move. Tolentino further argues that the internet has distorted the human perception of scale - this meant that an idea was only as important as it was important to each individual. Consequently, our culture has become increasingly ego-centric while viewing content that naturally corresponds with our ideological alignment.

Chapter two introduces Jia Tolentino’s brief stint with reality television in which she featured in a series Girls v. Boys. Each episode is structured in a predictable way - the participants engage in a challenge, go home to gossip, and repeat. Tolentino argues that reality TV constructs stories out of nothing, and endorses a culture in which everyone believes that their lives are worth broadcasting to a larger audience.

Chapter three addresses the constant social and economic optimization induced by our capitalist infrastructure. Tolentino provides anecdotal examples of her time at the Peace Corps and then her decision to participate in a barre class at Ann Arbor. Barre was an exercise that was adopted by women who had an intense desire to mimic a dancer’s lean and enviable body through a manic, ritualized work-out session that required laudable physical endurance. Tolentino also introduces the reader to the athleisure industry, which advertises an individual’s commitment to working out. Like barre, athleisure was invented to advertise a woman’s commitment to working out, and optimize both the physical appearance as well as productivity. Through analyzing the social effects of both barre and athleisure, Tolentino argues that our society is becoming concerningly obsessed with optimizing all areas of life, and embracing an endless cycle of work and optimized performance while deluding ourselves that it is a worthy venture.

Chapter four focuses on Tolentino’s commentary on popular literary characters and their emotional maturation from childhood to adolescence to adulthood. Tolentino first provides examples of female protagonists in popular childhood books whom are naturally resilient despite growing up in troubling circumstances. These qualities take a sharp turn when the characters enter adolescence or are forced into marriage - these events cause women to lose the right to individual desire and personal autonomy. The chapter then transitions to an analysis of a classic teenage protagonist who feels overwhelmed by a narcissism-fueled depression. These characters generally feel misunderstood and helpless. Similarly, adult protagonists in literature are generally drained of hope and desire for life - consequently, Tolentino concludes that the typical literary heroine’s journey reminds us that women often traverse a journey from brave to blank to bitter as a result of social conditions.

Chapter five begins with a description on Tolentino’s Evangelical background in Houston - she describes the city to be a very diverse but segregated experience in which the wealthy white population dominated minority groups. Although she was raised in a religious setting, Tolentino began to question her faith regarding topics of sexuality and other questions of morality. Around the same time, she discovered chopped and screwed music for the very first time. She compares this music style to Ecstasy, which strips away the user’s inhibition and become more in-tune with the emotional state of others. Although her religious upbringing laid the foundation for her value system, Tolentino argues that hip-hop music and the experience of drugs generated a much more pure and unfiltered experience.

In chapter six, Tolentino draws the readers’ attention to scams in the recent decade. This includes the Fyre Festival, housing market crash, student debt disaster, Facebook platform, Girlboss, Amazon’s business practices, as well as Trump’s victory in the 2016 presidential election. These examples all serve to demonstrate the ease in which millennials mindlessly fall victim to numerous scams in order to stay afloat in the current socio-economic climate.

Chapter seven focuses on the sexual assault cases that had occurred at the University of Virginia, Tolentino’s alma mater. It centers around the rape allegation that Jackie filed against Phi Psi, and the complicated nature of the case. Jackie exaggerated the details of the offense because she believed that her trauma would not be properly addressed unless she exacerbated the actual events that had occurred. Tolentino addresses the fraternity culture and its toxic culture of violence, female degradation, and solidifying white elitism. She further argues that UVA’s initial founding is deeply embedded with racist and sexist intentions that are not sufficiently acknowledged out of general discomfort towards its reality.

Chapter nine, the final chapter, focuses on Tolentino’s social commentary on weddings and marriage. Weddings cost an extravagant amount of money that the industry markets as “tradition” - however, Tolentino argues that weddings have historically been brief and intimate, and weddings only became elaborate and commercialized events in recent years. Tolentino also argues that marriage has historically benefited men more than women. For instance, upon marriage, a husband was able to control any land she owned or income she would later earn. Tolentino closes the chapter with a personal explanation of her aversion to marriage, and the historical meaning associated with what it means to be someone’s wife.