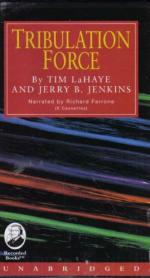 Tribulation Force: The Continuing Drama of Those Left Behind Summary & Study Guide

Tim LaHaye
This Study Guide consists of approximately 38 pages of chapter summaries, quotes, character analysis, themes, and more - everything you need to sharpen your knowledge of Tribulation Force.

Tribulation Force: The Continuing Drama of Those Left Behind Summary & Study Guide Description

Tribulation Force: The Continuing Drama of Those Left Behind Summary & Study Guide includes comprehensive information and analysis to help you understand the book. This study guide contains the following sections:

This detailed literature summary also contains Topics for Discussion and a Free Quiz on Tribulation Force: The Continuing Drama of Those Left Behind by Tim LaHaye.

"Left Behind: A Novel of the Earth's Last Days" by Tim LaHaye and Jerry B. Jenkins is a book set at the beginning of the Tribulation, the period in which the world begins its path toward the second coming of Jesus as well as the rising of the Antichrist.

Captain Rayford Steele and his wife, Irene, are at odds about faith. Although Steele was raised to go to church and try to live a good life, the man never truly accepted Jesus as his savior. After Steele is involved in a near fatal accident, Irene turns to religion and becomes a zealot. Irene pressures Steele to change and it almost ruins their marriage. Irene's zealotry also prompts Steele to consider having an affair with Hattie Durham, a senior flight attendant.

A big turning point for Steele is the Rapture. The authors detail the chaos and terror revolving around the beginning of the end of the world when people disappear and ascend to Heaven, leaving non-believers behind.

Also present on the flight to London are Hattie Durham and Cameron "Buck" Williams, an ace reporter for the prestigious Global Weekly. As much as everyone tries to make sense of the happenings, even the savviest among them is confused and bewildered. It is only when the plane disembarks that things begin to make the slightest bit of sense.

After the event, which occurs while Steele was in flight, Steele realizes that his family is gone, proving that Irene's beliefs about being "called home" by Jesus were true. Steele seeks refuge with Bruce Barnes, a visitation pastor at the New Hope ViIlage Church in Chicago. Even though Barnes is a pastor, his faith was not strong and in fact, the pastor had never truly accepted Jesus as his personal savior.

Barnes, along with Steele, is deeply affected by the Rapture and its aftermath. Steele goes to Barnes after he finds Irene and Raymie are gone. Barnes plays a recorded message from the senior pastor regarding the Rapture and its importance. Together, the doubting men become saved and experience a new level of faith never witnessed before.

Steele tries his hardest to convert his daughter Chloe as well as Hattie. Steele learns that he must witness without fear if he is going to save anyone.

While Williams struggles with his own lack of faith, the readers learn about Nicolae Carpathia, a man who quickly rises from a low level position in the Romanian government to become president of the country. Carpathia is clever and has a way of mesmerizing people worldwide. Carpathia's powers affect all but true believers and soon the man is named as the new Secretary General of the United Nations.

Williams becomes convinced that Carpathia is the Antichrist and is proven to be correct when Carpathia executes two high profile men and then makes everyone believe that it was a suicide.

By this time, Williams is the last of the group to fully accept Christ. As Carpathia continues to ascend to the pinnacle of the political and religious worlds, Williams returns to Chicago to pledge himself to the Tribulation Force, perhaps the only organization to see Carpathia's true self.

More summaries and resources for teaching or studying Tribulation Force: The Continuing Drama of Those Left Behind.

Tribulation Force: The Continuing Drama of Those Left Behind from BookRags. (c)2022 BookRags, Inc. All rights reserved.