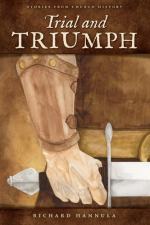 Trial and Triumph: Stories from Church History Topics for Discussion

Richard M. Hannula
This Study Guide consists of approximately 29 pages of chapter summaries, quotes, character analysis, themes, and more - everything you need to sharpen your knowledge of Trial and Triumph.

What features of Trial and Triumph mark the book out as a specifically Protestant work?

Can you draw any conclusions about the author's perspective on Christianity from the chapter titles and themes? What are they?

Which theological views within Christianity does Hannula consider corruptions of true Christian doctrine? Who are they associated with?

Hannula does not merely praise the figures in his book but sometimes issues criticisms. Who does he criticize? Is he critical enough? Why or why not?

More summaries and resources for teaching or studying Trial and Triumph: Stories from Church History.