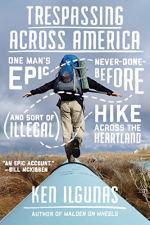 Ken Ilgunas
This Study Guide consists of approximately 42 pages of chapter summaries, quotes, character analysis, themes, and more - everything you need to sharpen your knowledge of Trespassing Across America.

This detailed literature summary also contains Topics for Discussion on Trespassing Across America by Ken Ilgunas.

The following version of the book was used to create this study guide: Ilgunas, Ken. Trespassing Across America: One Man's Epic, Never-Done-Before (And Sort of Illegal) Hike Across the Heartland. Blue Rider Press, 2016. Amazon Kindle E-Book Edition.

After an adventure hiking in Alaska with a friend, Ken Ilgunas decides to set out on a several-months-long hike along the path of the proposed Keystone XL pipeline. This journey will cover approximately 1,900 miles and will take him from Alberta to southern Texas. Despite many reservations, uncertainties, and obstacles, Ken is determined and begins his journey by hitchhiking north to Fort McMurry to view the tar sands in person before starting his hike.

Ken hikes alone through Alberta and Saskatchewan, carrying all his supplies in a pack and camping at night. He meets many friendly locals along the way who offer him food, shelter, and warm showers. Ken is taken in by the beauty of the countryside and gets to better know and understand the people who live in the Great Plains, though he often does not agree with their politics or their views on the pipeline and climate change. Along the way, Ken is faced with many potential dangers, including cow herds, angry dogs, and proprietary landowners.

When he crosses the border into the United States, he finds that trespassing on private land is taken more seriously and he is frequently cautioned against the danger of getting shot. Despite the risks of angry farm owners, aggressive dogs, and stampeding cattle herds, Ken continues trespassing on private land most of the way, which keeps him more closely on the path of the pipeline and shaves many miles off his journey. Ken frequently stops in towns where he can buy hot meals and use the wifi at local libraries and community spaces. Almost always, he meets kindly locals to continue to offer him food and shelter, though it is very rare that he meets anyone with progressive ideologies or politics.

In Nebraska, Ken achieves a degree of local celebrity and media attention. Many Nebraskans are opposed to the pipeline because of its threat to their groundwater, so Ken's hike catches their attention. He attends a local rally and meets a local named Rick who joins his hike for a few days and encourages him to focus on environmental concerns when speaking to the media. All along his journey, Ken reflects on different issues surrounding the Great Plains. He writes about their geological history, the development of agriculture, and their current economic deprecation, as well as the agricultural and environmental concerns currently at play. He also reflects on the greater issue of climate change and how we may shift our cultural ideologies toward ones that are more sustainable and healthy for both us and the planet. In Kansas and Oklahoma, Ken witnesses poverty, agricultural degradation, unsustainable industries, and struggling economies first-hand. Though these appear to be issues throughout the Great Plains, the poverty and lack of community seem to be most apparent in these states.

In Texas, Ken meets up with two more temporary traveling companions, Storms and Jessica, who boost his spirits in different ways toward the end of his journey. Finally, after months of hiking, camping, trespassing, meeting and getting to know strangers, and reflecting on life, climate change, and our society, Ken ends his hike by putting his feet in Sabine Lake, which empties into the Gulf of Mexico. Mere days after his hike, Ken attends an environmentalist rally in Washington DC. After his hike, Ken returns to his normal life, though he is more hopeful about the future of the planet than he was before. He knows that what we really need cannot be delivered by a pipe and he now sees the world through the eyes of a hiker, believing and hoping that we may be moving toward a world with less dependence on fossil fuels.

More summaries and resources for teaching or studying Trespassing Across America.