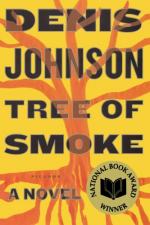 Denis Johnson
This Study Guide consists of approximately 55 pages of chapter summaries, quotes, character analysis, themes, and more - everything you need to sharpen your knowledge of Tree of Smoke.

This detailed literature summary also contains Quotes and a Free Quiz on Tree of Smoke by Denis Johnson.

William “Skip” Sands is a member of the Psy Ops team of the CIA while the Americans are involved in the conflict in Vietnam. He is a young man who seems to be following in the footsteps of his uncle, Colonel Francis Xavier Sands. Colonel Sands assigns Skip the daunting task of copying and cross-referencing a huge set of index cards containing information about people, places, and events. The Colonel believes the cards represent vital intelligence that will help the Americans win the war. Skip soon realizes that the information is outdated and useless, but he continues to work on the task until Colonel Sands arranges for Skip to transfer to Vietnam.

Skip believes that he will become an important part of the war effort once he's transferred. He winds up in a remote village with hardly any contact with anyone other than his two house servants. He is living under an alias and is supposed to be compiling information about local folklore and fairy tales. Colonel Sands believes learning about the local culture will help win the war. Skip is chafing under the new assignment and does little toward actually working. He soon realizes that Colonel Sands is losing touch with reality. When Skip looks over an article that Colonel Sands claims to have authored, he knows that his uncle's career is in trouble.

Colonel Sands then comes up with a plan to use a double agent to get misinformation in the hands of the Vietcong. A Vietnamese man named Trung Than agrees to be that double agent and Colonel Sands orders Skip to use his limited knowledge of the Vietnamese language to learn everything he can about Trung. They spend only a short time together before Colonel Sands learns that the operation has been compromised. He accuses Skip of having passed information on to their superiors. Skip insists that he wasn't to blame but he's heartbroken that his uncle would think so. Trung lives in a small hotel until an assassin is sent to kill him. He escapes with his life and disappears.

Colonel Sands dies and Skip learns that he is going to take the blame for all the things that have gone wrong under his uncle's orders. Another American operative gives Skip some cash and Skip manages to disappear for several years. He begins a new life but is eventually found guilty of running guns. He and all the members of his operation are hanged.

While Skip and Colonel Sands are working on the intelligence factors of the war, there are others heavily involved in the fighting. Bill and James Houston are brothers who are members of the American military. Both are horrified by the atrocities of war. They each sporadically send money home to their mother but both wind up spending most of their pay on alcohol and women. Bill returns to the United States earlier than James. He struggles for awhile and spends some time in prison. He seems to be getting his life together by the time James returns to the U.S. Bill sees James going down the same path and is frustrated when James won't listen to reason and winds up in prison.

There are other characters who go about their lives with the Vietnam war is going on. A nurse named Kathy is widowed at an early age when her husband, a priest, is killed. She winds up working for an organization that arranges adoptions for Vietnamese orphans. She has a brief affair with Skip and struggles with her faith for awhile.

Hao and Kim are a Vietnamese couple and Hao aligns himself with Colonel Sands. However, he soon begins feeding information to other Americans as well and the couple leave Vietnam as payment for his information. As the story comes to a close, these and other characters are trying to pull their lives back together after years of war.

More summaries and resources for teaching or studying Tree of Smoke.