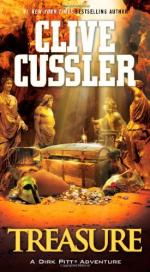 This detailed literature summary also contains Topics for Discussion and a Free Quiz on Treasure by Clive Cussler.

In the Fourth Century A.D., Junius Venator and a group of Romans placed the last of a huge cache of artifacts into a man-dug cavern, lit a blasting charge and sealed the entrance. Venator was saving the items from destruction in Rome and had sailed across the ocean to make it happen. In 1991, Dirk Pitt and his crew were searching for a downed Russian submarine off the coast of Greenland when a charter jet crashed just a mile away. A team of archaeologists were also working nearby and all converged on the crash site to discover that an attempt on the life of a UN leader, Egyptian Hala Kamil, had failed though virtually everyone else on the plane had perished. While conducting underwater searches, Dirk's team located items that indicated a Fourth Century Roman presence. The archaeologists also located a Fourth Century Roman coin among the native village findings. They use the equipment at Dirk's disposal to search the surrounding ocean floor and find a partially sunken ship from Fourth Century Rome. Among the parchments that were located, they discover a crude map and notes that indicate that the ship had been among the fleet that delivered the Roman artifacts for burial. Dirk immediately begins his search for the site.

Their quest leads Dirk first to Colorado where he happens on another attempt on Hala's life. Dirk, archaeologist Lily Sharp and Guirdino are involved in a wild car chase in Dirk's newly-restored classic car. The car is no match for the Mercedes in pursuit so Dirk heads up a mountain and then plunges down a ski slope in order to escape.

Soon after, Hala joins the presidents of Egypt and Mexico on a yacht that is being hijacked by the joint efforts of brothers who hope to take over Mexico and Egypt. Dirk's father, an important US Senator, is also on board. Dirk leads the charge in search of the yacht and is eventually among those who execute a daring rescue against impossible odds. Through a series of small discoveries, Dirk decides that the treasure must be buried in a Texas town called Roma, just on the US side of the Rio Grande.

As a subplot, there are two brothers - members of a past drug cartel - who are planning to overtake Egypt and Mexico. Disguised as natives of those countries, each is whipping their fellow countrymen into frenzies in an effort to take over their respective countries. Dirk foils their plans by rescuing the hostages on the yacht and later puts down an uprising in Mexico, effectively ending the brothers' quests for power.