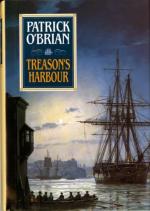 Patrick O'Brian
This Study Guide consists of approximately 30 pages of chapter summaries, quotes, character analysis, themes, and more - everything you need to sharpen your knowledge of Treason's Harbour.

This detailed literature summary also contains Topics for Discussion and a Free Quiz on Treason's Harbour by Patrick O'Brian.

TREASON'S HARBOUR is the ninth novel in a series about the British Navy. Captain Jack Aubrey led a cast of characters through multiple voyages in a background of treason. Aubrey was the seasoned captain of two ships, his favorite of which was the Surprise. Aubrey took the Surprise on nearly every one of his missions. He had acquired an experienced and loyal crew during his years at sea. These hard working men were an asset to his ships. A doctor by the name of Stephen Maturin often accompanied Captain Aubrey on his voyages. Dr. Maturin was a good friend of Aubrey's as well as a naval surgeon and undercover British intelligence officer.

At the beginning of the novel the Surprise was docked in Malta. The year was circa 1800 and Britain was at war with Napoleon's French empire. The Surprise was being repaired from its recent skirmish at sea. Aubrey and Maturin passed time together at the hotel and ale houses of the nearest city, Valletta. The crew also experienced a prolonged period of rest during the repairs. During this period of relative calm it came to Maturin's attention that a Navy wife, Mrs. Laura Fielding, was both a language tutor and an accomplished musician. Maturin enjoyed classical music so Mrs. Fielding invited Maturin to a small concert at her home. That evening Laura was unable to play well. She confessed to Dr. Maturin that she had been approached by French spies who asked her to gain Maturin's confidence and provide them with strategic information. She is coerced into cooperation because her husband has been a prisoner of war for quite some time, and she was assured that her cooperation equated with his continued safety. Dr. Maturin agreed to make it appear as though he was romantically involved with Laura in an effort to keep her and her husband safe, although he was still very much in love with his own wife. Aubrey and Maturin sailed away many times, always returning in between voyages to check on Mrs. Fielding. On one of their voyages it was discovered that her husband was indeed alive. Mr. Fielding escaped, was taken aboard by a friendly ship, and was on his way home to Laura.

Maturin knew that Mr. Fielding's return would mean that the French spies no longer had leverage over Laura, and that they may try to kill her, so when in port he checked on her often. At one such visit he finds that her guardian dog, Ponto, had unexpectedly died, and her maid had left hastily. After witnessing French spies inside her home, Maturin moved her to safety aboard the Surprise. British agents were left to locate and attend to the group of French spies residing in Malta. The book closes with Aubrey sailing out to sea and Mrs. Fielding's imminent reunion with her husband.

More summaries and resources for teaching or studying Treason's Harbour.